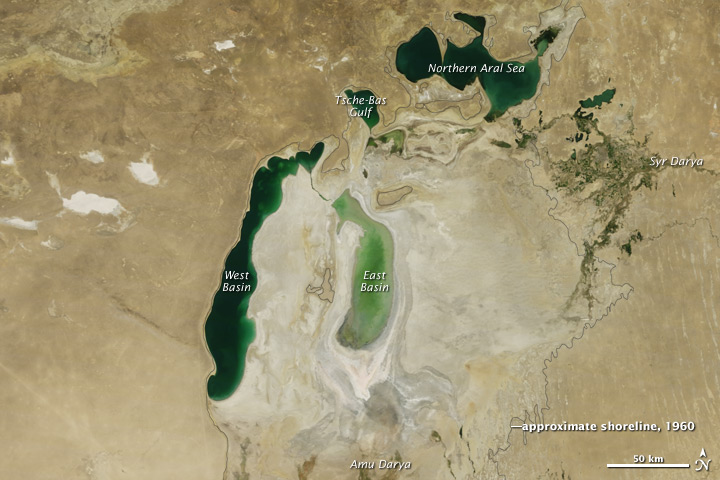 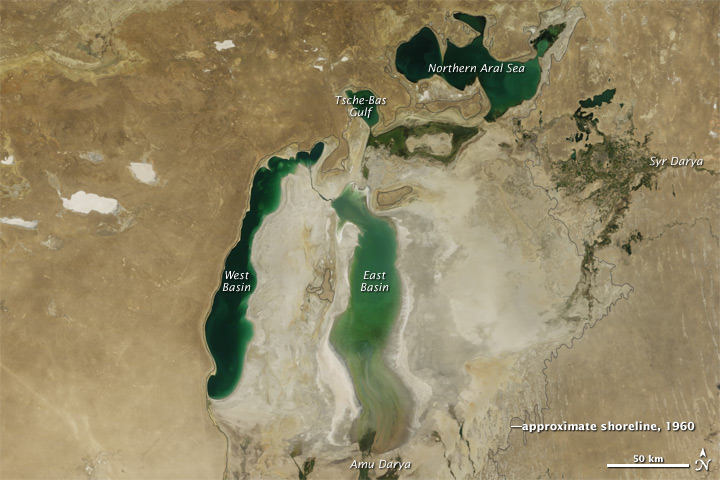 Jewel-like green against the desert of central Asia, the Aral Sea has a long history of change. Over thousands of years, the lake has filled and dried, its fate linked to the flow of the rivers that feed it, particularly the Amu Darya. Since 1960, local rivers have been diverted in large-scale agricultural projects, and the Aral Sea has lost 90 percent of its volume.

The Moderate Resolution Imaging Spectroradiometer (MODIS) on the Terra satellite acquired these images above on August 15, 2011, and August 26, 2010. The 2011 view is the latest addition to the World of Change series, which includes annual images since 2000. (You may also view the images overlaid on each other by clicking on "View Image Comparison." Learn more about this tool here.)

Of the remaining segments of the sea, the eastern basin of the Southern Sea is the most shallow. Fed primarily by the Amu Darya (darya means river), the basin all but disappeared in 2009 after four years of drought slowed and eventually stopped the river flow. In 2010, the drought broke and water swelled the eastern basin once again. But in 2011, less water entered the basin. Water levels in this image are lower than any previous year except 2009.

The image shows other signs of a drier year in 2011. The Amu Darya delta contains far less water than in 2010, and the Tsche-Bas Gulf is much smaller. Cut off from the Southern Aral Sea by a dam, the Northern Sea is more stable, but still shrank in 2011 compared to 2010.

Even if efforts were made to restore the Southern Aral Sea, it is unlikely that the it could recover in the near term. More than 50 percent of the flow of the Amu Darya would have to enter the southern Aral Sea to bring it back to life. This water, however, is needed to grow crops to feed the populations of Uzbekistan, Turkmenistan, Kazakhstan, Afghanistan, and Tajikistan. While improvements in irrigation efficiency could restore some water to the sea, it would not be enough for a full recovery.

The Aral Sea is equally unlikely to dry up entirely, argues Philip Micklin, a geographer who has been studying the Aral Sea for decades. The sea still gets water from rain and snowmelt, irrigation runoff, and ground water. As demonstrated from 2010 to 2011, year-to-year fluctuations in rain and snow will likely have a big influence on the sea’s extent, particularly in the shallow eastern basin. 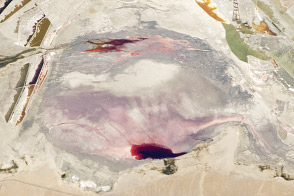