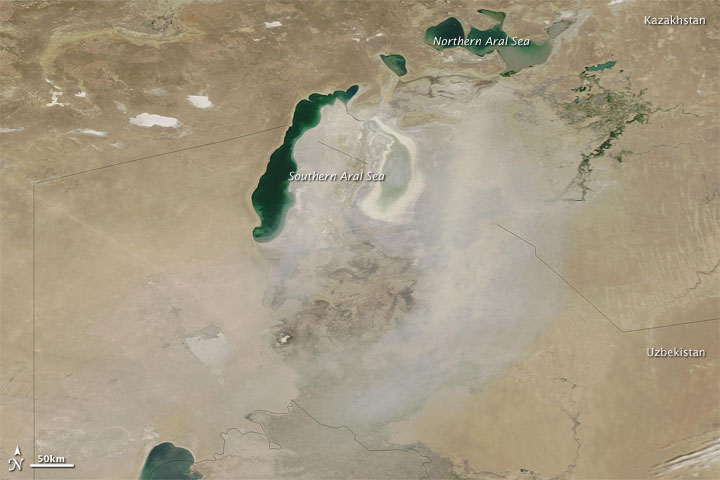 A dust storm formed over the southern portion of the Aral Sea on June 28, 2009, as the Moderate Resolution Imaging Spectroradiometer (MODIS) on NASA’s Aqua satellite passed overhead. A thin veil of dust blew over southern Kazakhstan and Uzbekistan, supplied by salty lakebed sediments.

The Aral Sea was once the world’s fourth-largest lake, but in the 1960s, irrigation projects rapidly drained the lake’s water. Over time, the sea split into northern and southern parts. The southern sea further split into east and west portions, and the shallower eastern half declined especially quickly, leaving behind a dusty husk. The water bodies that once comprised the Aral Sea now straddle the borders of two former Soviet states: Kazakhstan and Uzbekistan. Kazakhstan constructed the Kok-Aral Dam in 2005 between the northern and southern parts of the Aral Sea. The dam was intended to preserve the smaller, less polluted Northern Aral Sea. Although successful, the dam further exacerbated water loss in the Southern Aral Sea, which was already deemed beyond saving.

For a time series of changes in the Aral Sea, see the Earth Observatory’s World of Change feature.