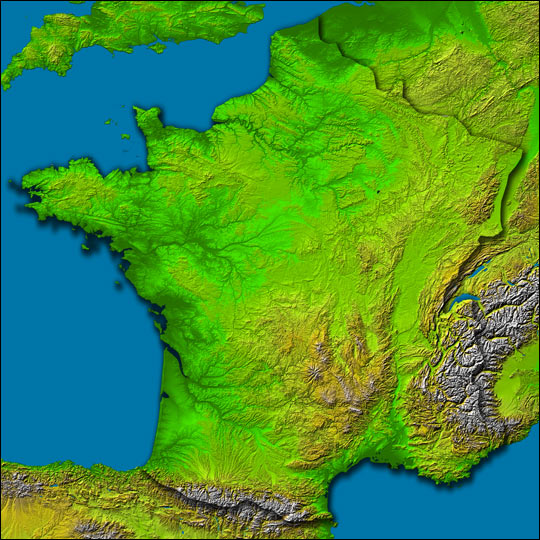 This image of France was generated with data from the Shuttle Radar Topography Mission (SRTM). For this broad view the resolution of the data was reduced to 6 arcseconds (about 185 meters north-south and 127 meters east-west), resampled to a Mercator projection, and the French border outlined. Even at this decreased resolution the variety of landforms comprising the country is readily apparent.

The upper central part of this scene is dominated by the Paris Basin, which consists of a layered sequence of sedimentary rocks. Fertile soils over much of the area make good agricultural land. The Normandie coast to the upper left is characterized by high, chalk cliffs, while the Brittany coast (the peninsula to the left) is highly indented where deep valleys were drowned by the sea, and the Biscay coast to the southwest is marked by flat, sandy beaches.

To the south, the Pyrenees form a natural border between France and Spain, and the south-central part of the coutry is dominated by the ancient Massif Central. Subject to volcanism that has only subsided in the last 10,000 years, these central mountains are separated from the Alps by the north-south trending Rhone River Basin.

Elevation data used in this image were acquired by the Shuttle Radar Topography Mission aboard the Space Shuttle Endeavour, launched on Feb. 11, 2000. SRTM used the same radar instrument that comprised the Spaceborne Imaging Radar-C/X-Band Synthetic Aperture Radar (SIR-C/X-SAR) that flew twice on the Space Shuttle Endeavour in 1994. SRTM was designed to collect 3-D measurements of the Earth's surface. To collect the 3-D data, engineers added a 60-meter (approximately 200-foot) mast, installed additional C-band and X-band antennas, and improved tracking and navigation devices.