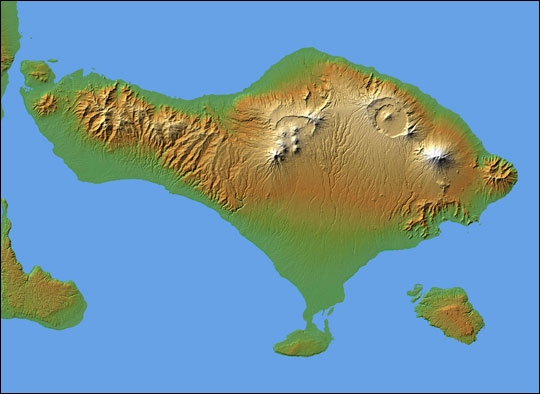 The volcanic nature of the island of Bali is evident in this shaded relief image generated with data from the Shuttle Radar Topography Mission (SRTM).

Bali, along with several smaller islands, make up one of the 27 Provinces of Indonesia. It lies over a major subduction zone where the Indo-Australian tectonic plate collides with the Sunda plate, creating one of the most volcanically active regions on the planet.

The most significant feature on Bali is Gunung Agung, the symmetric, conical mountain at the right-center of the image. This “stratovolcano,” 3,148 meters (10,308 feet) high, is held sacred in Balinese culture, and last erupted in 1963 after being dormant and thought inactive for 120 years. This violent event resulted in over 1,000 deaths, and coincided with a purification ceremony called Eka Dasa Rudra, meant to restore the balance between nature and man. This most important Balinese rite is held only once per century, and the almost exact correspondence between the beginning of the ceremony and the eruption is believed by those involved to have great religious significance.

Elevation data used in this image were acquired by the Shuttle Radar Topography Mission aboard the Space Shuttle Endeavour, launched on Feb. 11, 2000. SRTM used the same radar instrument that comprised the Spaceborne Imaging Radar-C/X-Band Synthetic Aperture Radar (SIR-C/X-SAR) that flew twice on the Space Shuttle Endeavour in 1994. SRTM was designed to collect 3-D measurements of the Earth’s surface. To collect the 3-D data, engineers added a 60-meter (approximately 200-foot) mast, installed additional C-band and X-band antennas, and improved tracking and navigation devices. The mission is a cooperative project between NASA, the National Geospatial-Intelligence Agency (NGA) of the U.S. Department of Defense and the German and Italian space agencies. It is managed by NASA’s Jet Propulsion Laboratory, Pasadena, Calif., for NASA’s Earth Science Enterprise, Washington, D.C.