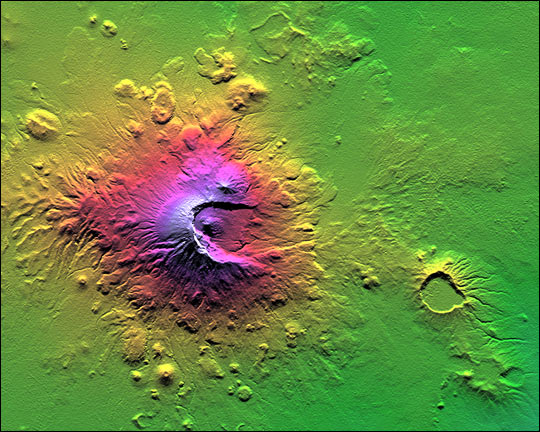 Mount Meru is an active volcano located just 70 kilometers (44 miles) west of Mount Kilimanjaro. It reaches 4,566 meters (14,978 feet) in height but has lost much of its bulk due to an eastward volcanic blast sometime in its distant past, perhaps similar to the eruption of Mount Saint Helens in Washington State in 1980. Mount Meru most recently had a minor eruption about a century ago. The several small cones and craters seen in the vicinity probably reflect numerous episodes of volcanic activity. Mount Meru is the topographic centerpiece of Arusha National Park. Its fertile slopes rise above the surrounding savanna and support a forest that hosts diverse wildlife, including nearly 400 species of birds, and also monkeys and leopards.

Two visualization methods were combined to produce this image: shading and color coding of topographic height. The shade image was derived by computing topographic slope in the north-south direction. Northern slopes appear bright and southern slopes appear dark, as would be the case at noon at this latitude in June. Color coding is directly related to topographic height, with green at the lower elevations, rising through yellow, red, and magenta, to blue and white at the highest elevations.

Elevation data used in this image was acquired by the Shuttle Radar Topography Mission (SRTM) aboard the Space Shuttle Endeavour, launched on Feb. 11, 2000. SRTM used the same radar instrument that comprised the Spaceborne Imaging Radar-C/X-Band Synthetic Aperture Radar (SIR-C/X-SAR) that flew twice on the Space Shuttle Endeavour in 1994. SRTM was designed to collect 3-D measurements of the Earth's surface. To collect the 3-D data, engineers added a 60-meter (approximately 200-foot) mast, installed additional C-band and X-band antennas, and improved tracking and navigation devices. The mission is a cooperative project between NASA, the National Imagery and Mapping Agency (NIMA) of the U.S. Department of Defense and the German and Italian space agencies. It is managed by NASA's Jet Propulsion Laboratory, Pasadena, Calif., for NASA's Earth Science Enterprise, Washington, D.C.