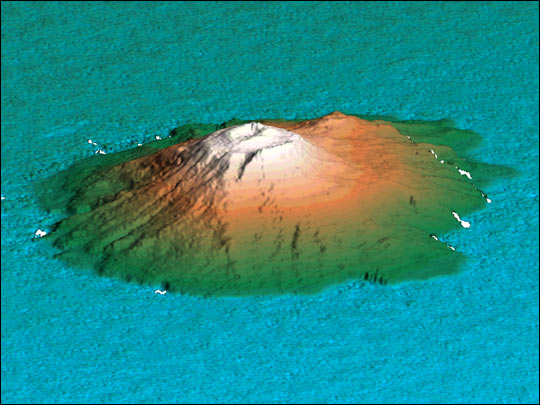 This 3D perspective view shows the Japanese island called Miyake-Jima viewed from the northeast. This island—about 180 kilometers (110 miles) south of Tokyo—is part of the Izu chain of volcanic islands that runs south from the main Japanese island of Honshu. Dominated by the 820-meter-high (2,700 feet) volcano Mount Oyama, Miyake-Jima is home to 3,800 people. In late June 2000, a series of earthquakes alerted scientists to possible volcanic activity and on June 27 authorities evacuated 2,600 people. On July 7, the island was hit by a typhoon passing overhead, and on July 8 the volcano began erupting. The volcano erupted five times over the next week, spreading gray ash over surrounding areas. Detailed topographic information can be used to predict the directions that lava flows will take. The previous major eruption of Mount Oyama occurred in 1983, when lava flows destroyed hundreds of houses, and an earlier eruption in 1940 killed 11 people.

This three-dimensional perspective view was generated using topographic data from the Shuttle Radar Topography Mission. A computer-generated artificial light source illuminates the elevation data to produce a pattern of light and shadows, while colors show the elevation as measured by SRTM. Slopes facing the light appear bright, while those facing away are shaded. On flatter surfaces, the pattern of light and shadows can reveal subtle features in the terrain. The elevation is indicated by colors. Lowest elevation areas appear blue, medium elevations appear green, while higher elevations appear brown and white.

The Shuttle Radar Topography Mission (SRTM), launched on February 11, 2000, used the same radar instrument that comprised the Spaceborne Imaging Radar-C/X-Band Synthetic Aperture Radar (SIR-C/X-SAR) that flew twice on the Space Shuttle Endeavour in 1994. SRTM was designed to collect three-dimensional measurements of the Earth's surface. To collect the 3-D data, engineers added a 60-meter-long (200-foot) mast, installed additional C-band and X-band antennas, and improved tracking and navigation devices. The mission is a cooperative project between the National Aeronautics and Space Administration (NASA), the National Imagery and Mapping Agency (NIMA) of the U.S. Department of Defense (DoD), and the German and Italian space agencies. It is managed by NASA's Jet Propulsion Laboratory, Pasadena, CA, for NASA's Earth Science Enterprise, Washington, DC.