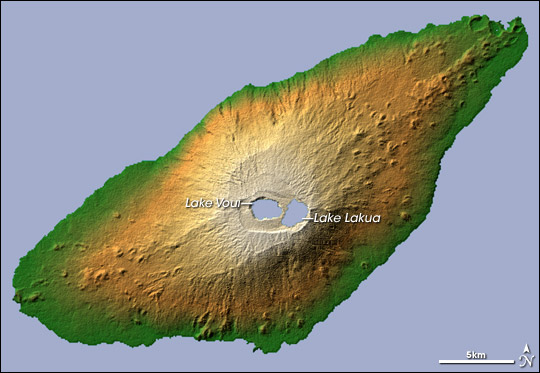 In late November 2005, Aoba (locally called Mt. Manaro) Volcano on Ambae Island in the South Pacific began rumbling, threatening a dangerous eruption. About 5,000 people, half the island’s population, were evacuated in early December when the volcano started spewing clouds of steam and toxic gases as molten material entered Lake Voui, which fills the volcano’s crater. According to reports on the Smithsonian Global Volcanism Website, the contact of the molten material with the lake water produced a plume of steam and gas that rose 3.9 to 4.5 kilometers (12,800-14,800 feet) above sea level. The eruption created an island within the lake that is about 200 meters wide and 50-60 meters high.

Aoba Volcano is the dominant feature in this shaded-relief image of Ambae Island, part of the Vanuatu archipelago, which includes more than 80 islands in the South Pacific located about three-quarters of the way from Hawaii to Australia. Last active in 1996, the 1,496-meter (4,908-foot), Hawaiian-style, basaltic shield volcano has lakes within its summit caldera, or crater. The November-December eruption involved a vent at the center of Lake Voui (at left), which was formed approximately 425 years ago after an explosive eruption.

Two visualization methods were combined to produce the image: shading and color coding of topographic height. The shading indicates direction of the slopes; northwest slopes appear bright, while southeast slopes appear dark. Color coding shows height, with green at the lower elevations, rising through yellow and tan, to white at the highest elevations. The volcano is not perfectly cone-shaped, but is elongated in a northeast-to-southwest direction. The island is dotted with outcrops of scoria, a glassy lava rock riddled with bubbles created by volcanic gases escaping the rock during eruptions. The flattened-looking summit shows that the newest crater is actually nested within older, larger craters.

Elevation data used in this image were acquired by the Shuttle Radar Topography Mission (SRTM) aboard the Space Shuttle Endeavour, launched on February 11, 2000. SRTM used the same radar instrument that comprised the Spaceborne Imaging Radar-C/X-Band Synthetic Aperture Radar (SIR-C/X-SAR) that flew twice on the Space Shuttle Endeavour in 1994. SRTM was designed to collect 3-D measurements of the Earth’s surface. To collect the 3-D data, engineers added a 60-meter (approximately 200-foot) mast, installed additional C-band and X-band antennas, and improved tracking and navigation devices. The mission is a cooperative project between NASA, the National Geospatial-Intelligence Agency (NGA) of the U.S. Department of Defense and the German and Italian space agencies. It is managed by NASA’s Jet Propulsion Laboratory (JPL), Pasadena, Calif., for NASA’s Earth Science Enterprise, Washington, D.C.