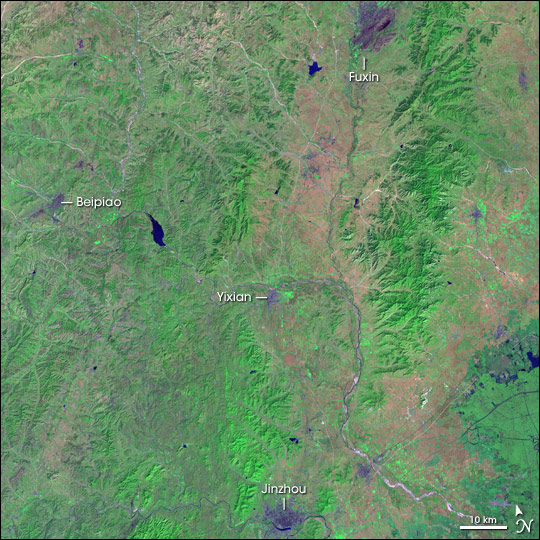 “Liaoning is not the most picturesque part of China,” remarks Mark Norell in his book Unearthing the Dragon. Picturesque or not, Liaoning Province has won the admiration of paleontologists like Norell for its exceptional fossils. Its fossil treasures include plants, insects, mollusks, crustaceans, fish, frogs, salamanders, turtles, lizards, and dinosaurs—particularly feathered dinosaurs. The first widely acknowledged feathered dinosaur, Sinosauropteryx prima, was unveiled at a scientific meeting in 1996, and Liaoning fossils have continued rewriting dinosaur history ever since. If it were filmed today, Jurassic Park might include a feathery T. rex.

The Enhanced Thematic Mapper Plus (ETM+) sensor on NASA’s Landsat satellite captured this image on October 2, 2000. Light reflected by the Earth’s surface in the visible (green), near-infrared, and shortwave-infrared parts of the electromagnetic spectrum combined to make this false-color image. In this image, dark purple indicates urban areas where the surfaces are mostly concrete. Dark blue indicates water. Green indicates vegetatation. The bright green, rectangular areas are likely irrigated farmland. Reddish-brown indicates bare ground. The Yiwulu Shan Mountains appear on the right (southeast in this image). To the west of them is the Xi River.

Interspersed with vegetation are frequent patches of reddish-brown bare ground. While such areas hold little appeal for farmers, they make good fossil quarries because paleontologists don’t have to dig below vegetation to find what they seek, and plant roots are less likely to meddle with old skeletons. Still, Liaoning’s status as an exceptional source of fossils is relatively recent. Since the unveiling of the first feathered dinosaur fossil in the 1990s, other prizes have appeared in this region, such as an intact embryo of a pterosaur, and Repenomamus robustus—a cat-sized mammal who turned the tables on dinosaurs and made one of them its last meal. Perhaps the most colorful fossil is Sinornithosaurus millennii, nicknamed “Dave the Fuzzy Raptor.”

In recent years, many paleontologists have turned to satellite data to better assess their fossil-hunting prospects. With some practice, paleontologists’ trained eyes can spot areas in satellite images that show sedimentary rocks likely to hold fossils. Being able to spot potential fossil localities through satellite imagery can save researchers much time and expense on the ground. Landsat data have helped paleontologists find fossils in Mongolia.

Scientists Use NASA Landsat Data to Hunt for Dinosaur Fossils

With Landsat 5 and 7 data, scientists can identify areas comprised of sedimentary rocks where vegetation is sparse—requirements for good fossil sites.