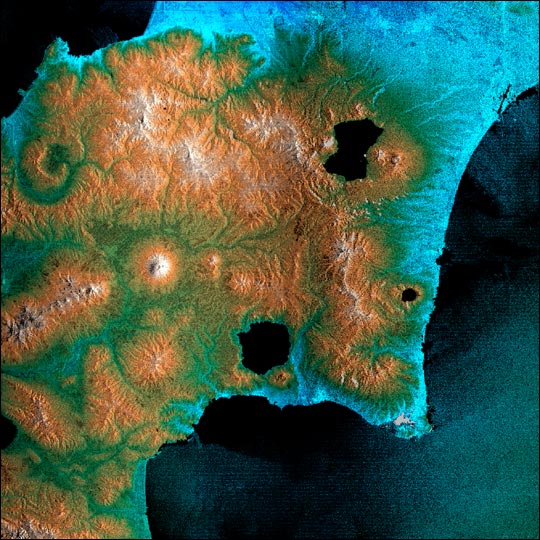 The southeast part of the island of Hokkaido, Japan, is an area dominated by volcanoes and volcanic caldera. The active Usu Volcano is at the lower right edge of the circular Lake Toya-Ko and near the center of the image. The prominent cone above and to the left of the lake is Yotei Volcano with its summit crater. The city of Sapporo lies at the base of the mountains at the top of the image and the town of Yoichi -- the hometown of SRTM astronaut Mamoru Mohri -- is at the upper left edge. The bay of Uchiura-Wan takes up the lower center of the image. In this image, color represents elevation, from blue at the lowest elevations to white at the highest. The radar image has been overlaid to provide more details of the terrain. Due to a processing problem, an island in the center of this crater lake is missing and will be properly placed when further SRTM swaths are processed. The horizontal banding in this image is a processing artifact that will be removed when the navigation information collected by SRTM is fully calibrated.

This image was acquired by the Shuttle Radar Topography Mission (SRTM) aboard the Space Shuttle Endeavour, launched on February 11, 2000. SRTM used the same radar instrument that comprised the Spaceborne Imaging Radar-C/X-Band Synthetic Aperture Radar (SIR-C/X-SAR) that flew twice on the Space Shuttle Endeavour in 1994. SRTM was designed to collect three-dimensional measurements of the Earth's surface. To collect the 3-D data, engineers added a 60-meter-long (200-foot) mast, installed additional C-band and X-band antennas, and improved tracking and navigation devices. The mission is a cooperative project between the National Aeronautics and Space Administration (NASA), the National Imagery and Mapping Agency (NIMA) of the U.S. Department of Defense (DoD), and the German and Italian space agencies. It is managed by NASA's Jet Propulsion Laboratory, Pasadena, CA, for NASA's Earth Science Enterprise, Washington, DC. Size: 100 by 150 kilometers (62 by 93 miles)