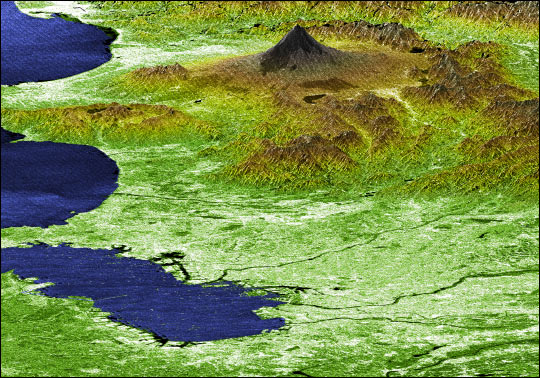 Japan’s Mt. Fuji presents a beautiful backdrop for the city of Tokyo in this perspective view generated using data from the Shuttle Radar Topography Mission (SRTM). Occupying most of the image foreground, Tokyo’s metropolitan area, at about 13,388 square kilometers (5,169 square miles), is home to more than 32 million people, making it the most densely populated urban area in the world. Tokyo residents live within striking distance of Japan's tallest volcano, which is also the country's highest point at 3,776 meters (12,388 feet). Mt. Fuji is still considered active, although the last major eruption of this perfectly symmetrical stratovolcano came in 1707. Because of its height and spectacular scenery, Mt. Fuji is a favorite for touring, mountain climbing and hiking. In this image, elevations are represented by color; height increases from white to green to brown. For visualization purposes, topographic heights are exaggerated two times.

The elevation data used in this image was acquired by SRTM aboard the Space Shuttle Endeavour, launched on February 11, 2000. SRTM used the same radar instrument that comprised the Spaceborne Imaging Radar-C/X-Band Synthetic Aperture Radar (SIR-C/X-SAR) that flew twice on Endeavour in 1994. SRTM was designed to collect three-dimensional measurements of Earth’s land surface. To collect the 3-D SRTM data, engineers added a mast 60 meters (about 200 feet) long, installed additional C-band and X-band antennas, and improved tracking and navigation devices.

Two other images of this scene (PIA02791 and PIA02792) are available on the Planetary Photojournal.