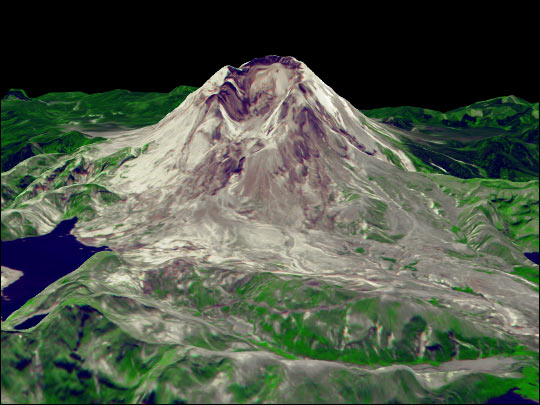 This Advanced Spaceborne Thermal Emission and Reflection Radiometer (ASTER) image of Mt. St. Helens volcano in Washington State was acquired on August 8, 2000 and covers an area of 37 by 51 km. Mount Saint Helens, a volcano in the Cascade Range of southwestern Washington that had been dormant since 1857, began to show signs of renewed activity in early 1980. On 18 May 1980, it erupted with such violence that the top of the mountain was blown off, spewing a cloud of ash and gases that rose to an altitude of 19 kilometers. The blast killed about 60 people and destroyed all life in an area of some 180 square kilometers (some 70 square miles), while a much larger area was covered with ash and debris. It continues to spit forth ash and steam intermittently. As a result of the eruption, the mountain's elevation decreased from 2,950 meters to 2,549 meters.

The simulated fly-over was produced by draping ASTER visible and near infrared image data over a digital topography model, created from ASTER’s 3-D stereo bands. The color was computer enhanced to create a “natural” color image, where the vegetation appears green. The topography has been exaggerated 2 times to enhance the appearance of the relief.