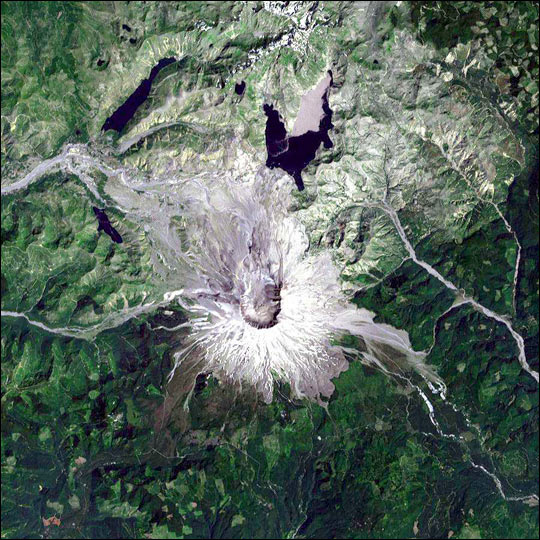 The catastrophic eruption of Mt. St. Helens 20 years ago today (on May 18, 1980), ranks among the most important natural events of the twentieth century in the United States. Because Mt. St. Helens is in a remote area of the Cascades Mountains, only a few people were killed by the eruption, but property damage and destruction totaled in the billions of dollars.

Mount St. Helens is an example of a composite or stratovolcano. These are explosive volcanoes that are generally steep-sided, symmetrical cones built up by the accumulation of debris from previous eruptions and consist of alternating layers of lava flows, volcanic ash and cinder. Some of the most photographed mountains in the world are stratovolcanoes, including Mount Fuji in Japan, Mount Cotopaxi in Ecuador, Mount Hood in Oregon, and Mount Rainier in Washington. The recently erupting Mount Usu on the island of Hokkaido in Japan is also a stratovolcano. Stratovolcanoes are characterized by having plumbing systems that move magma from a chamber deep within the Earth's crust to vents at the surface.

The height of Mt. St. Helens was reduced from about 2950 m (9677 ft) to about 2550 m (8364 ft) as a result of the explosive eruption on the morning of May 18. The eruption sent a column of dust and ash upwards more than 25 km into the atmosphere, and shock waves from the blast knocked down almost every tree within 10 km of the central crater. Massive avalanches and mudflows, generated by the near-instantaneous melting of deep snowpacks on the flanks of the mountain, devastated an area more than 20 km to the north and east of the former summit, and rivers choked with all sorts of debris were flooded more than 100 km away. The area of almost total destruction was about 600 sq. km. Ash from the eruption cloud was rapidly blown to the northeast and east producing lightning which started many small forest fires. An erie darkness caused by the cloud enveloped the landscape more than 200 km from the blast area, and ash could be seen falling from the sky over the Great Plains, more than 1500 km distant.

This image was acquired by Landsat 7 on Aug. 22, 1999. It was produced at 30-m resolution using bands 3, 2, and 1 to display red, green, & blue, respectively ("true color"). Some of the effects of the massive eruption on May 18, 1980, can still be seen clearly, especially on the northern and eastern flanks of Mount St. Helens, which are still mostly barren (shades of white and gray). The crater is in the center of the image. Note the streaking from the crater (gray on the image). These are the remnants of pyroclastic flows (superheated avalanches of gas, ash and pieces of rock) that carved deep channels down the slopes and onto the relatively flat areas near the base of the mountain. The partially-filled Spirit Lake can be seen just to the northeast of the crater (blue-black on the image), and the where most of the energy was directed during the blast is the gray area immediately to the northwest of the crater. However, on other parts of the mountain, the rejuvenation process is obvious. Ash deposits have supplied minerals which have accelerated vegetation growth (various shades of green). Though far from what it looked like 20 years ago, Mount St Helens is actively recovering.