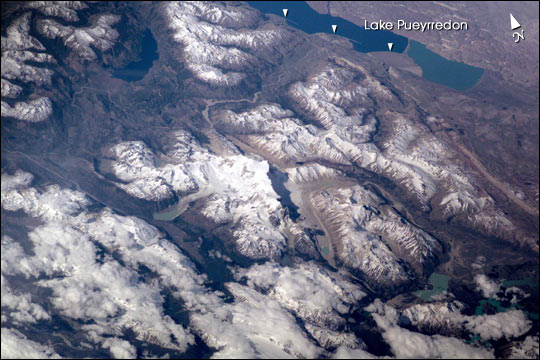 This scene on the remote, rugged Argentine/Chilean border in the far southern Andes Mountains offers numerous, dramatic examples of both erosional processes and features of ice and water. The sharp, glaciated crest of the Cerro San Lorenzo (center) exceeds 12,000 feet and casts a long shadow southeastward. Glaciers on its western flank flow into the valley. This Electronic Still Camera photo was taken from the International Space Station, in December 2000 (late spring) when most of the previous winter’s snow had melted below an altitude of 6,000 feet.

Lago Pueyrredon, and the other lakes visible here, have been excavated by geologically recent episodes of glacier erosion, when glaciers extended all the way onto the lowland plains (top right). Since the last melting of the glaciers (~15,000 years ago) three distinct “fan-deltas” (semicircular features, marked with arrows) have formed where rivers flow into the lake. Counterclockwise currents in the lake-driven by strong winds from the west-have generated thin sand spits from each fan-delta. The largest spit (attached to the largest fan-delta, see right arrow) has isolated an approximately 10-kilometer long segment of the south end of the lake. The river that constructed the largest fan presently discharges turbid water to this isolated basin, giving it a lighter color than the rest of the lake.

Glacial data collected over the past 50 years indicate that small ice bodies are disappearing at accelerated rates. (EOS, vol 81, no. 24, June 13, 2000) Predictions are that large fluctuations in land ice, with significant implications to society, are possible in the coming decades and centuries due to natural and anthropogenic climate change. Before glacial data can be used to address critical problems pertaining to the world’s economic and environmental health, more detailed information about such glaciers is needed. Images like this from the International Space Station can be added to those taken from satellites to provide information on glaciers in remote areas around the world.

Additional photographs taken by astronauts can be viewed at NASA-JSC's Gateway to Astronaut Photography of Earth (http://eol.jsc.nasa.gov/sseop). 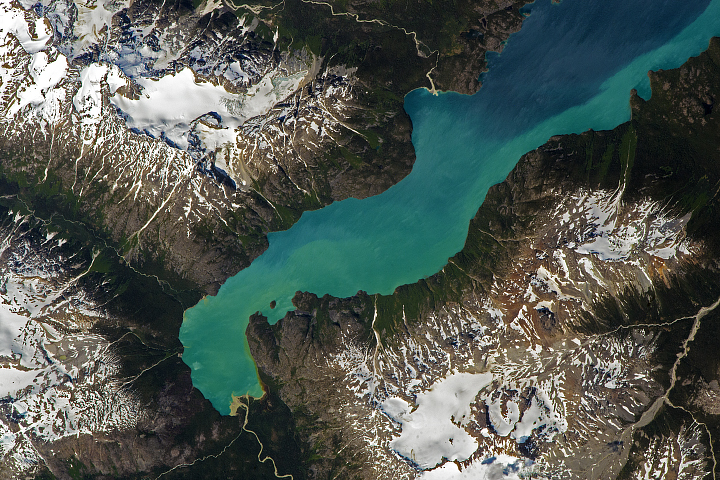