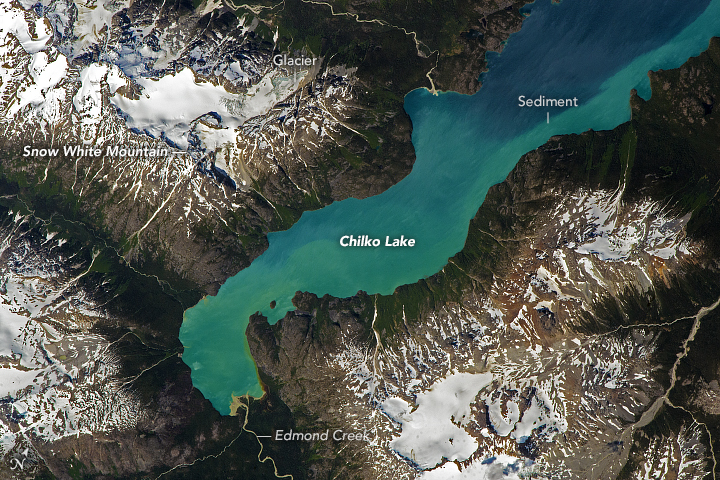 Astronauts aboard the International Space Station (ISS) took this photograph of the south end of Chilko Lake in the Coast Mountains of British Columbia. Seen here are the southern 11 kilometers (6 miles) of the lake. The lake surface lies at 1,175 meters (3,855 feet) elevation, with neighboring mountains reaching so high (more than 2,200 meters) that they support permanent ice fields and glaciers.

Occupying a valley carved by glaciers, the remote lake dominates Ts’yl-os Provincial Park (pronounced “sigh-loss”). The lake, 250 kilometers north of Vancouver, is the largest natural high-elevation lake in Canada. The park is administered as the traditional territory of the Xeni Gwet’in people, one of the First Nations of British Columbia. The park is also named Ts’ilɁos in the Athabaskan Chilcotin (Tsilhqot’in) language.

Edmond Creek has built a small delta at the head of the lake. Its glacial meltwater feeds fine white sediment (glacial flour) into the lake, changing its color. Most of the lake appears a deep blue color because of its depth (366 meters), but the glacial flour lightens the water color near the delta. The pattern of light-colored water hugging the shoreline shows that currents in the lake flow counter-clockwise and draw the muddy water northward. The currents are driven by the dominant westerly winds in this region of Canada.

Seen from space, the extreme topography of the Canadian Coast Mountains creates a distinctive contrast between snowpack and ice on high peaks (such as Snow White Mountain) and dark valleys nearby. The valleys are dominated by forests and are often in shadow, partly because of the low sun angle at this latitude. Some north-facing slopes never receive direct sunlight.

Astronaut photograph ISS052-E-8635 was acquired on June 26, 2017, with a Nikon D4 digital camera using an 1150 millimeter lens, and is provided by the ISS Crew Earth Observations Facility and the Earth Science and Remote Sensing Unit, Johnson Space Center. The image was taken by a member of the Expedition 52 crew. The image has been cropped and enhanced to improve contrast, and lens artifacts have been removed. The International Space Station Program supports the laboratory as part of the ISS National Lab to help astronauts take pictures of Earth that will be of the greatest value to scientists and the public, and to make those images freely available on the Internet. Additional images taken by astronauts and cosmonauts can be viewed at the NASA/JSC Gateway to Astronaut Photography of Earth. Caption by Justin Wilkinson, Texas State University, JETS Contract at NASA-JSC.