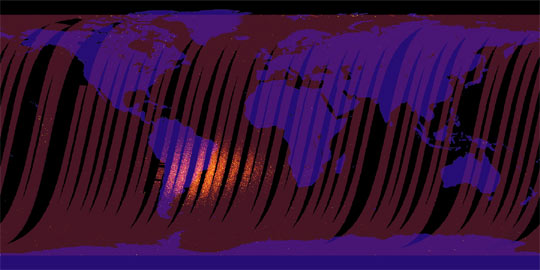 This map was created by specially processing MISR "dark" data taken between 3 February and 16 February 2000, while the cover was still closed. Data from the red band of the most forward-looking MISR camera were geographically projected over a map of Earth’s land areas. Individual orbit tracks are visible, and some tracks are missing due to data gaps, missing spacecraft navigation information, or other early-mission processing problems. Each picture element is a square measuring one-quarter of a degree in latitude and longitude, and each contains hundreds to thousands of pixels from the raw MISR imagery. The South Atlantic Anomaly (SAA) is a region of unusually high proton levels. Because proton “hits” even in the SAA are relatively infrequent, each picture element of the map shows the most extreme “outliers” resulting from proton hits, rather than the average of all observations. This accentuates the effect of the SAA.

For more information about MISR, see the MISR web site.

Even before the cover opened, the MISR instrument began making scientific measurements. The MISR cameras, designed to detect visible light, are also sensitive to radiation in Earth’s upper atmosphere. With the cover closed, the effects of this radiation stand out. This map was created by specially processing MISR “dark” data taken over two weeks in February 2000, while the cover was still closed. The South Atlantic Anomaly, a region of high levels of radiation over the south Atlantic and parts of South America, is clearly visible.

Where in the World?