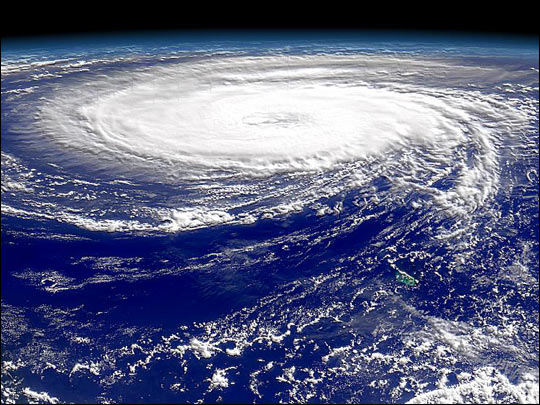 The first hurricane of the fall 2000 season, Alberto, regained hurricane-force winds on Wednesday, Aug. 9. as it moved slowly toward the center of the Atlantic Ocean (shown here on Aug. 11). Early Friday morning, Alberto had sustained winds of 75 miles per hour, classified as a relatively weak hurricane. Meteorologists said the storm could gain in wind speed to up to 100 miles per hour, but predicted it would move in a more northerly direction and miss both Bermuda and the U.S. east coast by hundreds of miles.

There are several other developing storms in the Atlantic, but none have reached tropical storm strength (39 mph).

This view is from the Sea-viewing Wide Field-of-view Satellite (Seawifs) on the afternoon of August 11, 2000. The storm is almost directly east of Bermuda, which is the small green area in the lower right of the image.

The SeaWiFS instrument captured the data for this composite view of an August 2000 hurricane while it was near Bermuda.