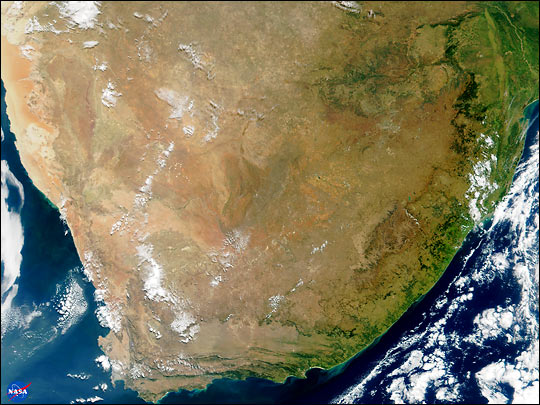 This true-color image of South Africa was acquired on May 14, 2000, by NASA's Moderate-resolution Imaging Spectroradiometer, or MODIS. The image was produced using a combination of the sensor's 250-m and 500-m resolution visible wavelength bands. As part of the opening ceremony to begin the joint U.S.-South Africa SAFARI Field Experiment, NASA presented print copies of this image as gifts to Dr. Ben Ngubane, Minister of Arts, Science & Technology, and Honorable Advocate Ngoaka Ramathlodi, Premier of the Northern Province, South Africa.

The area shown in this image encompasses seven capital cities and a number of the region's distinctive geological features can be seen clearly. Toward the northern (top) central part of the image, the browns and tans comprise the Kalahari Desert of southern Botswana. The Tropic of Capricorn runs right through the heart of the Kalahari and the Botswanan capital city of Gaborone sits on the Limpopo River, southeast of the Kalahari.

Along the western coastline of the continent is the country of Namibia, where the Namib Desert is framed against the sea by the Kaokoveld Mountains. The Namibian capital of Windhoek is obscured by clouds. Looking closely in the center of the image, the Orange River can be seen running from east to west, demarcating the boundary between Namibia and South Africa.

On the southwestern corner of the continent is the hook-like Cape of Good Hope peninsula and Cape Town, the parliamentary capital of South Africa. Running west to east away from Cape Town are the Great Karroo Mountains. The shadow in this image conveys a sense of the very steep grade of the cliffs along the southern coast of South Africa. Port Elizabeth sits on the southeasternmost point of South Africa, and a large phytoplankton bloom can be seen in the water about 100 miles east of there.

Moving northward along the east coast, the Drakensberg Mountains are visible. The two small nations of Lesotho and Swaziland are in this region, completely contained within South Africa's boundaries. In the upper righthand corner of the image is the Bay of Maputo, where sits Maputo, the capital of Mozambique. Fires are visible in the northeast corner of the image, near Maputo. Just north of Maputo is where the Limpopo River empties into the Indian Ocean. Tracing the Limpopo inland back toward the west, this river defines the northern boundary of South Africa with both Zimbabwe and Botswana.

Johannesburg, the commercial capital of South Africa, can be seen as the greyish pixels in the northeastern region of the country. The country's legislative capital, Pretoria, is about 50 miles north of Johannesburg and 250 miles west of Maputo, in the heart of the Northern Province (formerly known as Transvaal).