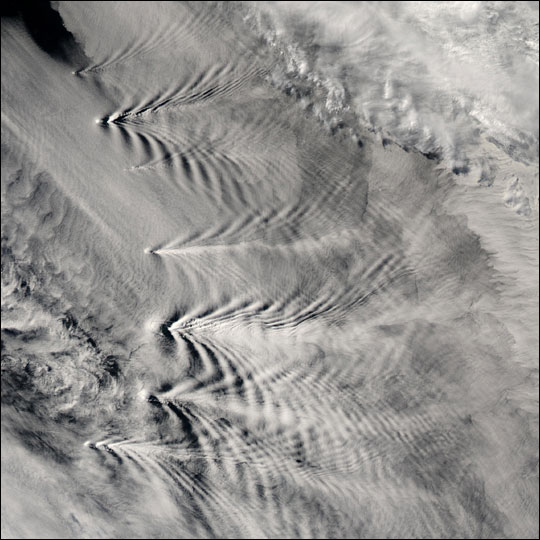 As is apparent in this true-color image, the islands are tall enough to disrupt the cloud patterns forming and flowing around them. Most of this scene is dominated by a large formation of low-level stratiform clouds that appears to be flowing in a southeasterly direction (from upper left to lower right). However, appearances can be deceiving, as the wake patterns extending due eastward from each of the islands suggest that the air mass is moving to the east. Alternatively, it is possible that there are two air masses moving in slightly different directions—a lower wind pattern moving due east with a slightly higher wind pattern moving southeast.

(The clouds in the upper righthand corner of this scene are higher level cirrus and altocumulus. You can see where they are casting shadows on the lower level stratiform cloud deck in several places.)

Notice how the size of the waves as well as the angle they form coming off the islands correlates to the height of the islands. For example, the peak on Zavodovski, the northernmost of the islands, stands at 1,807 feet (551 m), while the peak on Visokoi, the island just south of it, is 3,295 feet (1,005 m) tall. The taller Visokoi peak produces a more substantial wake pattern. Also notice how the wakes produced by the islands are fanning out and forming interference patterns where they meet one another.

This scene was acquired by the Moderate Resolution Imaging Spectroradiometer (MODIS), flying aboard NASA’s Aqua satellite, on January 27, 2004.

In the Southern Atlantic, a chain of eleven volcanic islands rises up from the ocean in an arc that extends roughly 240 miles (400 km) north to south. As is apparent in this true-color image, the islands are tall enough to disrupt the cloud patterns forming and flowing around them.