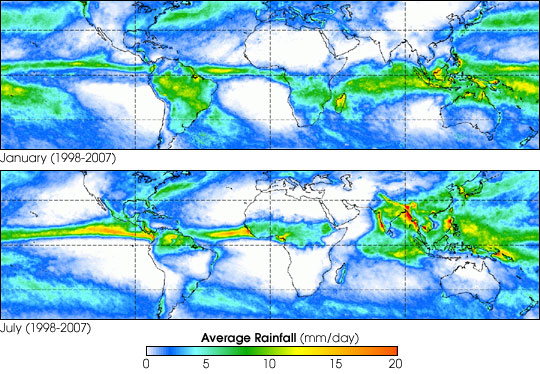 Rainfall is the primary way the atmosphere spreads heat around. Not surprisingly, nearly two-thirds of all rain falls in the tropics, where incoming sunlight is steady year round. Sunlight evaporates water from the warm ocean and land surfaces. The water vapor holds on to the heat that drove its evaporation until it condenses back into rain drops and releases the heat back to the atmosphere. This perpetual cycle of heating, evaporation, condensation, and rainfall moves heat from one place on Earth to another.

Because it is so fundamental to Earth’s climate, a complete accounting of tropical rainfall has long been a major goal of climate researchers. The Tropical Rainfall Measuring Mission (TRMM, pronounced “trim”) satellite, a collaboration between NASA and the Japanese Space Agency, has gone a long way toward helping them reach that goal. This pair of images illustrates the rainfall patterns that TRMM observed during roughly its first decade of operations. The top image shows average daily rainfall rates during the month of January from 1998-2007; the lower image shows average daily rainfall rates in July during the same time frame. Scientists at NASA’s Goddard Space Flight Center merge the satellite data from TRMM with other sources of information (like ground-based rain gauges) to produce the best possible estimate of tropical precipitation.

In both images, the abundance of rain in tropical latitudes compared to higher latitudes is clear. But seasonal differences are obvious as well. In January, during Southern Hemisphere summer, the areas of heaviest rain are at or south of the equator: central and southern South America (left), southern Africa (center), Indonesia, and northern Australia (right). In July, Northern Hemisphere summer, the heaviest rain is at or north of the equator: Central America (left), the African Sahel (center), and India and Southeast Asia (right). An animation shows average monthly rainfall patterns collected during the TRMM mission to date.

On November 27, 2007, TRMM will enter its second decade of observations of Earth’s water cycle in the tropics. For more animations and information on the TRMM mission, please see the press release TRMM Turns Ten on the NASA Portal.