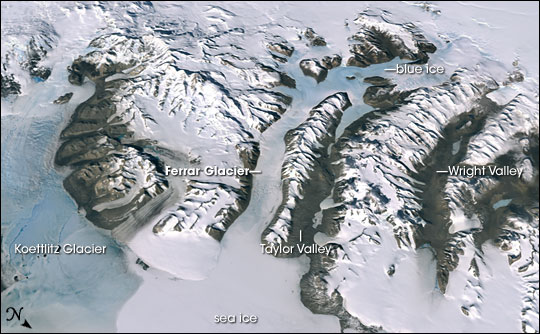 Remote, frigid, and often treacherous to traverse, Antarctica has always posed a challenge to the explorers and scientists who work there. As a result, remote-sensing scientists have steadily worked to develop detailed, accurate imagery of the continent—both to support research on the ground and to better study the continent from a safer vantage point. In November 2007, NASA, the U.S. Geological Survey, and the British Antarctic Survey jointly released a new image mosaic of Antarctica. Development of the mosaic was funded by the U.S. National Science Foundation. Known as the Landsat Mosaic of Antarctica (LIMA), this map is made of imagery that has a spatial resolution (level of detail) of 15 meters per pixel, the most detailed satellite mosaic of the icy continent yet created.

LIMA is comprised of Landsat images acquired between December 25, 1999, and December 31, 2001. This image shows a small portion of the mosaic around Ferrar Glacier, in the Dry Valleys near McMurdo Station. To create this image, data visualizers draped LIMA imagery over a digital elevation model to give a three-dimensional effect. The elevation shown is actual elevation (no exaggeration), and the perspective looks inland from the Ross Sea.

Although many people think of Antarctica as entirely blanketed by snow, the continent sports some areas of bare ground, and the Dry Valleys are a prominent example. Many years of relentless wind have swept these valleys clean of their snow cover. The same wind has also created blue ice. Ice absorbs a small amount of red light, but snow crystals are too small to show this light-absorption effect. Composed of larger ice crystals, however, blue ice makes the red light absorption more obvious. In this image, blue ice appears near the top of the image, upstream from the Ferrar Glacier. (Another example of blue ice appears along Prince Olav Coast, captured by the Moderate Resolution Imaging Spectroradiometer, or MODIS.)

LIMA shows remarkable detail, such as the peaks and shadows of the Royal Society Range (between the Ferrar and Koettlitz Glaciers), and the dirty surface of the Koettlitz Glacier, covered by dust and rocks blown off the nearby bare ground. LIMA also captures fingers of snow reaching down into Taylor and Wright Valleys, and the pools of snow along Taylor Valley.

Before the release of LIMA, the highest-resolution satellite mosaic of Antarctica was the MODIS Mosaic of Antarctica (MOA) and RADARSAT Antarctic Mapping Project (RAMP) created from radar data. Although more detailed than MOA, LIMA does not cover the continent as far south as the South Pole. A combination of LIMA and MOA imagery can display the entire continent.

The Byrd Glacier plunges through a deep, 15-mile-wide valley in the Transatlantic Mountains to create a 100-mile-long, rock-floored ice stream.