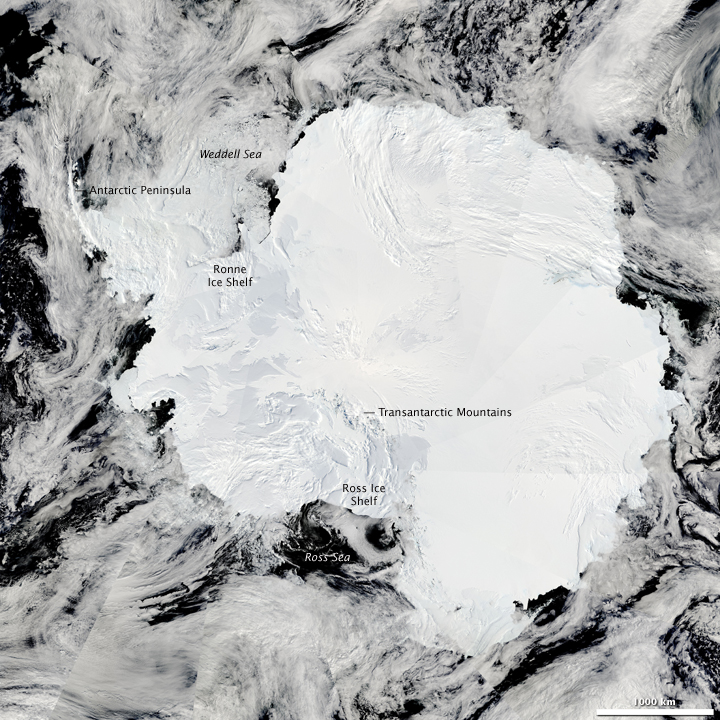 Relatively few people have seen Antarctica. A myth until the early 1800s, the ice-covered southern continent is difficult to get to and hostile to most life. But now, the MODIS Rapid Response System at NASA’s Goddard Space Flight Center is producing daily photo-like images of Antarctica. The images are valuable to scientists studying everything from ice to penguins, as well as to the crews of ships navigating through the southern ice pack.

The Moderate Resolution Imaging Spectroradiometer (MODIS) on NASA’s Aqua satellite captured this composite image on January 27, 2009. Few features are visible on the ice-covered landscape. The surface appears rough where the Transantarctic Mountains curve in a shallow “s” from the shore of the Ross Sea to the Ronne Ice Shelf. The Polar Plateau in the center of the continent is smooth, shaded only by the faint shadow cast by clouds. The Weddell Sea is textured with chunks of sea ice.

Antarctica was enjoying summer when this image was taken. During the summer, sunlight shines on the continent constantly. Winter is dark. For this reason, MODIS can only image Antarctica during the summer. Flying on both the Aqua and Terra satellites, MODIS orbits the Earth from north to south, passing over Antarctica many times every day. This mosaic image of Antarctica was created from data collected on various overpasses throughout the day. Each overpass is a pie-shaped wedge in the image.

Ross Sea Ice on the Move

The Moderate Resolution Imaging Spectroradiometer (MODIS) captured the movement in this pair of photo-like images of sea ice in the Ross Sea, taken on December 12 and December 13, 2007, within the span of nine hours. The ice was shifting, bunching and drifting northward so quickly that even in the short space of time that elapsed between the two images, noticeable differences developed.