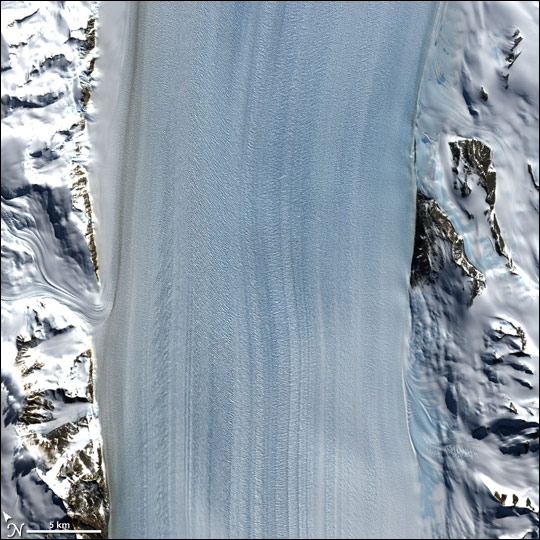 Just as the Amazon, the Mississippi, the Zambezi, the Yangtze, and Earth’s other mighty rivers drain the continents, rivers also drain Antarctica, only in this frozen landscape, the rivers are ice. Under their own massive weight, the Antarctic Ice Sheets are constantly spreading out like a mound of batter on a griddle. The outer edges of the ice sheets crumble into the Southern Ocean as they spread, giving birth to icebergs. In some places, steep mountains channel the flowing ice sheet into fast-moving rivers of ice. The Byrd Glacier is one such place. Located near McMurdo Station, the principal U.S. Antarctic Research Base, the Byrd Glacier plunges through a deep, 15-mile-wide valley in the Transatlantic Mountains to create a 100-mile-long, rock-floored ice stream.

This image, captured by the Landsat 7 satellite on December 24, 1999, shows part of the Byrd Glacier flowing through the Transatlantic Mountains. The glacial ice has a blue cast, and bears long stripes that echo the currents in a river. The current in this ice stream carries the glacier towards the Ross Ice Shelf at a rate of one half mile per year. Though this may seem like a snail’s pace, the Byrd Glacier is fast-flowing. It contributes more ice to the Ross Ice Shelf than any other ice stream, and the long grooves that mark its outflow are visible all the way to the edge of the Ross Ice Sheet, some 270 miles from the foot of the mountains.

A century ago, this site would have been inaccessible to all but a hardy handful of intrepid explorers. Now this frigid, windy, remote continent is revealing its features not just to visiting researchers, but to anyone with access to satellite imagery. In the spring of 2007, NASA and the U.S. Geological Survey (USGS) announced the release of an unprecedented image of Antarctica: the Landsat Image Mosaic of Antarctica (LIMA). With each pixel representing 15 by 15 meters (49 by 49 feet), LIMA offers ten times greater detail than any other satellite map previously available. LIMA images are derived from observations made by Landsat 7’s Enhanced Thematic Mapper Plus sensor, such as the image above.

Robert Bindschadler, chief scientist at the Laboratory for Hydrospheric and Biospheric Sciences at NASA’s Goddard Space Flight Center, oversaw the selection of Landsat images to create LIMA. Data visualizers stacked multiple Landsat images, removing occasional clouds, to offer clear views of the continent’s surface. In all, LIMA incorporates more than a thousand images of Antarctica. The LIMA team planned to continue releasing images through the summer of 2007, until the entire continent was covered. The project was part of the International Polar Year (IPY) focusing on large-scale research efforts about Earth’s polar regions.

LIMA images are available from the USGS LIMA site.

Image by Jesse Allen, made from the Landsat Image Mosaic of Antarctica (LIMA)

The Byrd Glacier plunges through a deep, 15-mile-wide valley in the Transatlantic Mountains to create a 100-mile-long, rock-floored ice stream.