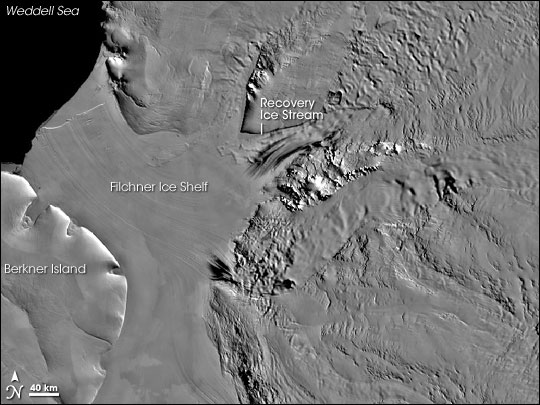 A slab of ice larger than the continental United States smothers much of East Antarctica. Draining from the East Antarctic Ice Sheet is a river of ice nearly 800 kilometers long. This stream, the Recovery Ice Stream, slides roughly 35 billion tons of ice into the ocean each year. In order to understand how large ice caps like the ones on Antarctica and Greenland will react to global warming, scientists must understand the basic dynamics of ice sheets, things like how fast they move, what causes them to speed up and slow down, and how much ice they carry to the ocean. In 2007, scientists reported that several large lakes lie beneath the Recovery Ice Stream and that when the ice stream flow over them, it speeds up.

This grayscale image of the East Antarctic Ice Sheet shows the Recovery Ice Stream flowing out of the rugged Shackleton Range Mountains and merging into the vast expanse of the Filchner Ice Shelf. The image is from the Mosaic of Antarctica, a map of digital images of the continent based on observations collected by the Moderate Resolution Imaging Spectroradiometer (MODIS) on NASA’s Terra and Aqua satellites. Dark shadows and brightly lit slopes reveal the area’s topography, tracing out flow lines and crevasses on the Filchner Ice Shelf; the coast of Berkner Island, encased by ice; and the deep shadows of crevasses in the glaciers where they first leave the mountains.

A team of researchers from Columbia University, NASA, and the Universities of New Hampshire and Washington found the lakes using a combination of satellite-based data from several sensors to peer across and below the ice in the area: radar data of ice velocity, photo-like images of the surface like the one pictured above, and laser data of ice elevation. To learn more about their discovery, see the sidebar The Role of Subglacial Lakes, part of the Earth Observatory’s feature article Something Under the Ice is Moving.

Image from the MODIS Mosaic of Antarctica collection, provided by the National Snow and Ice Data Center.