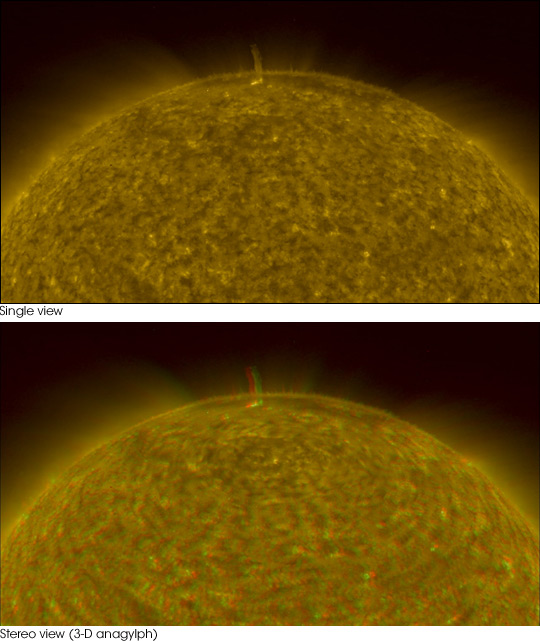 For millennia, we on Earth have seen the Sun as a flat disk in the sky. Now, for the first time, we are seeing the Sun in three dimensions, thanks to the recently launched twin Solar Terrestrial Relations Observatory (STEREO) spacecraft, which orbit the Sun, one in front of the Earth and one behind the Earth. Just as our two eyes give us a three-dimensional view of the world by providing us with two parallel perspectives, STEREO gives us a three-dimensional view of the Sun by combining views from the two spacecraft. The top image shows a spicule, a long jet of gas, near the Sun’s North Pole as seen by a single STEREO instrument on March 20, 2007. The lower image combines the views from both spacecraft as an anaglyph, which shows the Sun in three dimensions when viewed through red and cyan 3-D glasses.

In addition to providing us with new insight into the Sun, this three-dimensional view will help scientists predict when solar storms will hit the Earth. A solar storm can be bad news on Earth. When the solar atmosphere erupts, it blasts billions of tons of electrically charged gas, plasma, into space at a million miles per hour. Called coronal mass ejections, these eruptions can disrupt satellites and electrical systems, overload power lines, and trigger beautifully intense displays of the aurorae—the northern and southern lights—when the magnetic fields in the charged gas interact with Earth’s magnetic field. Because coronal mass ejections (CMEs) can be so destructive, it’s important to be able to predict when they will hit the Earth.

“In the solar atmosphere, there are no clues to help us judge distance. Everything appears flat in the 2-D plane of the sky. Having a stereo perspective just makes it so much easier,” said Dr. Russell Howard of the Naval Research Laboratory, Washington, the Principal Investigator for the SECCHI (Sun Earth Connection Coronal and Heliospheric Investigation) suite of telescopes on the spacecraft. “Knowing where the front of the CME cloud is will improve estimates of the arrival time from within a day or so to just a few hours,” said Howard. “STEREO also will help forecasters estimate how severe the resulting magnetic storm will be.”