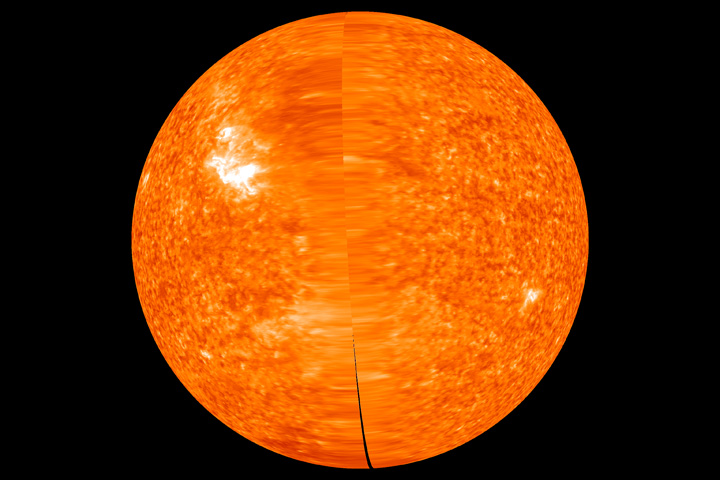 For the first time in history, the world has a full view of the far side of the Sun—and of the entire 360-degree sphere at once, for that matter—thanks to NASA’s Solar Terrestrial Relations Observatory (STEREO). On February 6, 2011, the twin satellites reached opposite sides of the Sun, allowing space weather watchers to detect activity at any point on the sphere and to image eruptions that might be headed toward Earth.

“For the first time ever, we can watch solar activity in its full 3-dimensional glory,” said Angelos Vourlidas, a member of the STEREO science team from the U.S. Naval Research Laboratory.

This composite image of the far side of the Sun was acquired at 18:16 Universal Time (Greenwich Time) on February 14, 2011. The left side of the disk was captured by STEREO A (ahead) and the right side by STEREO B (behind). Because of the geometry of the orbits of the spacecraft—which are slightly inclined above and below the plane of the planets, or the ecliptic—there are minor gaps in the data near the poles. Click on the animation links below the image to see a full day of Sun data from February 13.

It has been a long journey to a full 360 view of our nearest star. For hundreds of years, ground-based astronomers could only observe the Earth-facing side of the Sun. With the launch of the Solar and Heliospheric Observatory in 1995, researchers developed methods of helioseismology—studying wave propagation from inside the Sun—to model what was happening on the far side.

It has only been since October 2006, with the launch of STEREO, that scientists have been able to get a true “view” around the earth-visible limb of the Sun. For nearly five years, the two spacecraft slowly moved out in opposite arcs from a common point in the line from Sun to Earth. It took until this month to get to the full separation of 180 degrees.

STEREO’s telescopes are tuned to four wavelengths of extreme ultraviolet radiation, selected to trace key aspects of solar activity such as flares, tsunamis, and magnetic filaments. Solar storms can disrupt the functioning of satellites and distort the signals of electronic gadgets and power grids on Earth. This space weather creates beautiful auroras, but can also accelerate high-energy particles that are dangerous to humans working in space.

Each STEREO probe photographs half of the Sun and sends the images to Earth, where researchers combine the two views to create a sphere. Seeing the far side allows scientists to better anticipate solar disturbances. In the past, an active sunspot could emerge on the far side of the sun completely hidden from Earth. Then, the sun's rotation could turn that region toward Earth, spitting flares and clouds of plasma with little warning. Not anymore.