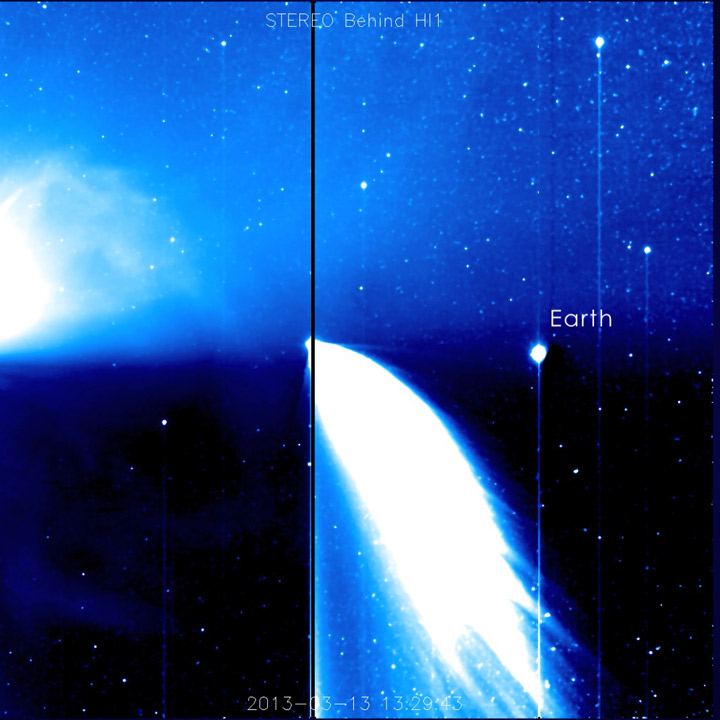 While observing the turbulent outer atmosphere of the Sun, or corona, Solar Terrestrial Relations Observatory B (STEREO-B) gathered a novel view of our home planet and a celestial visitor in the inner solar system. Comet PanSTARRS was visible to the naked eye from Earth’s northern hemisphere at the time, though STEREO might have had the better view.

The HI instrument observes the area just off the limb of the Sun (left) in order to detect the faintly visible light of the solar wind and coronal mass ejections (CMEs) as they blow out into the solar system. STEREO-B was on the far side of the Sun from the Earth, at about a 150 to 160 degree angle from the Earth-Sun line. Puffs of solar wind and from a CME are visible in a video made from the same images in March.

In the image and video, PanSTARRS and its tail are the bright, wide mass in the center of the image. A coronal mass ejection is developing on the Sun’s limb (left), and Earth is to the right of the comet. The white dots in the background are stars. The vertical lines across the image are artifacts of the imager; the light of the comet, the Earth, and some planets and stars is too bright for an instrument trying to observe the faint light of the Sun’s atmosphere.

Videos of the comet and solar eruptions are available by clicking here and here. To see the location of the satellites, comet, and planets, click here.