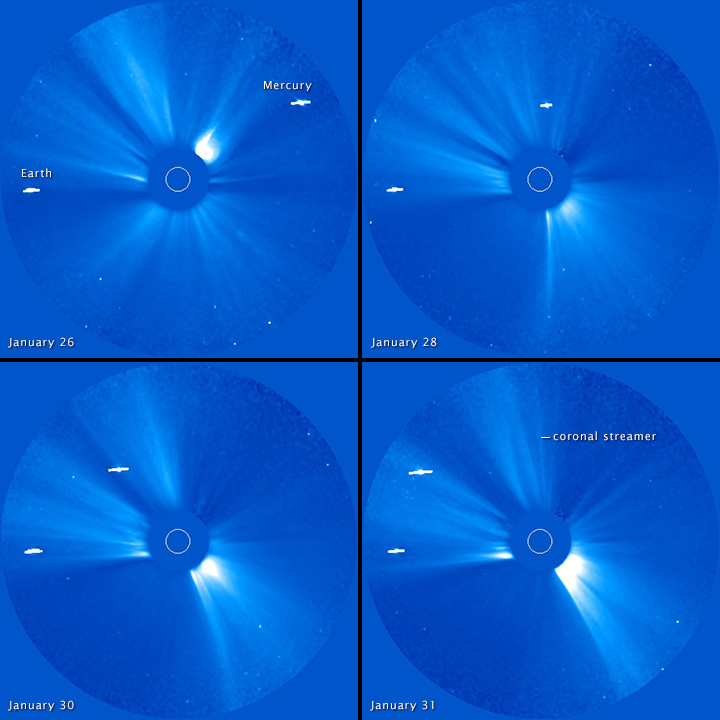 In late January 2015, a NASA spacecraft caught an unusual view of Earth. The Solar-Terrestrial Relations Observatory A (STEREO A) observed our planet from a position on the far side of our nearest star. It also glimpsed Mercury passing through the field of view.

STEREO includes a pair of spacecraft designed to observe the Sun’s activity—particularly coronal mass ejections and solar wind streams—in three dimensions. After eight years in orbit around the Sun, both spacecraft—STEREO Ahead, or A, and STEREO Behind, or B—are now on the far side, about 290 million kilometers (180 million miles) from Earth.

The images above were captured by the Sun-Earth Connection Coronal and Heliospheric Investigation (SECCHI) instrument on STEREO A. SECCHI includes an extreme ultraviolet imager, two heliospheric imagers, and two white-light coronagraphs. The images above were taken with the Cor2 coronagraph, which uses a small occulting disk near the telescope entrance to block the bright light of the Sun itself, allowing the instrument to capture the faint light of the solar wind and the Sun’s outer atmosphere, or corona. The white circle shows the diameter of the Sun. The field of view in each coronagraph images is about 21 million kilometers across (13 million miles), or 30 solar radii.

Earth appears as a white dot with a line through it on the left side of the images, while Mercury passes through the scene from right to left. Note how Earth’s position relative to the Sun and STEREO changes very little over the six days. However, Mercury moves quickly through the field of view, owing to its shorter orbital period and its shorter distance from the Sun and STEREO.

The horizontal lines through each planet are due to extra photons hitting the CCD detector, as Earth and Mercury are much brighter than the features the coronagraph was designed to observe. A few stars of the Milky Way are also visible in the background. Faint puffs of solar wind and coronal streamers stretch out from the solar disk in all directions, but predominantly from the upper left and lower right. On January 31, a possible eruption of solar material appears in the lower right quadrant.

The time-lapse video below shows the planetary motions and solar wind streams from January 28 to February 2, 2015.