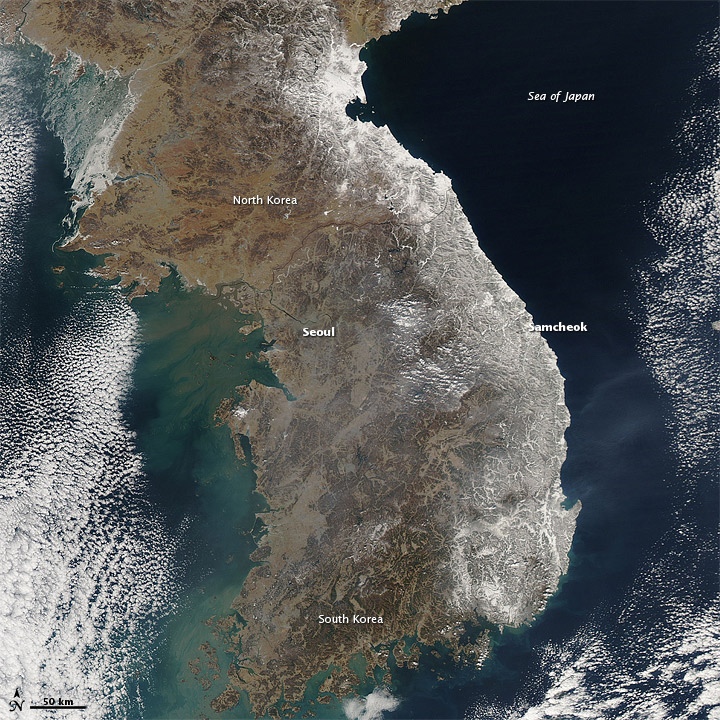 In mid-February 2011, residents along South Korea’s east coast were struggling to dig out from the heaviest snowfall in more than a century. The BBC reported that hundreds of stranded motorists awaited rescue, and hundreds of homes had collapsed under the weight of heavy snow. The South Korean government had deployed 12,000 soldiers to assist and rescue residents.

The Moderate Resolution Imaging Spectroradiometer (MODIS) on NASA’s Aqua satellite acquired this natural-color image on February 15, 2011. Mostly clear skies allowed MODIS a nearly uninterrupted view of the Korean Peninsula. East of Seoul, clusters of small white clouds cast shadows onto the surface below. But most of the white on the peninsula is snow.

Agence France-Presse reported that the port city of Samcheok recorded 100 centimeters (39 inches) of snowfall on February 11 and 12—the heaviest snowfall amount since recordkeeping began in 1911. In the west, Seoul escaped heavy snow, although the Han River froze over for the first time in years, according to the BBC.

The Chosunilbo reported that snow was expected to taper off for the east coast on February 14, although some snow might fall inland, including Seoul.

The heavy snowfall arrived on the heels of South Korea’s coolest January since the 1960s. The unusual cold might have been driven at least partly by the Arctic Oscillation (AO). A negative phase of the AO lowered temperatures in other parts of the Northern Hemisphere in January 2011.