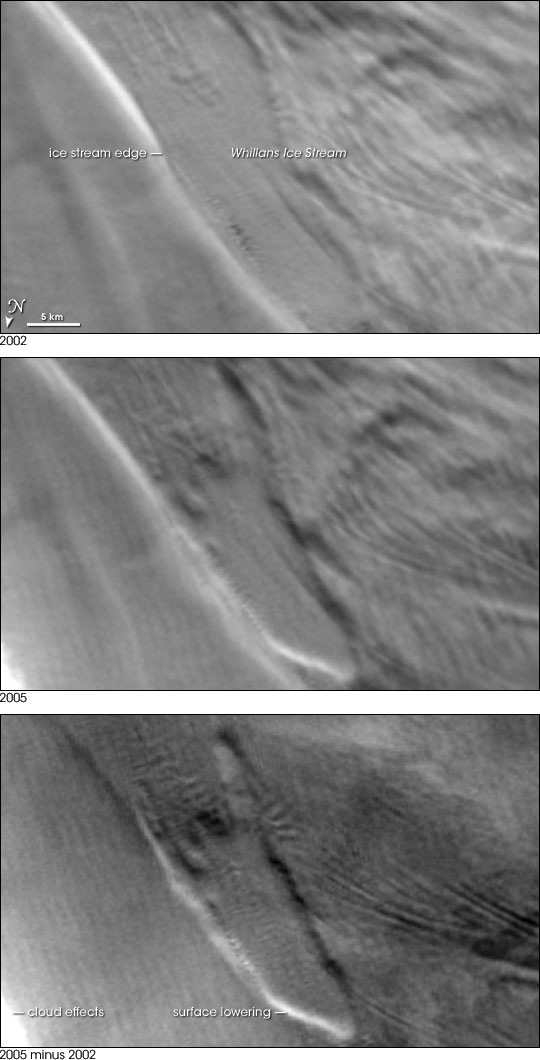 Throughout Antarctica, broad ribbons of ice known as ice streams shed large quantities of ice into the ocean. Glaciologists try to closely monitor ice streams because their movement ultimately affects sea level. Figuring out Antarctic ice stream behavior is tricky, however, and not just because this continent is so remote. Water influences ice stream flow, but the water lies thousands of feet below the ice surface. Its location and flow cannot be directly observed. Instead, the operation of Anarctica’s subglacial plumbing must be inferred from changes in ice surface elevation that occur when water moves from one subglacial pocket to another.

This trio of images shows change in the ice surface in an area in West Antarctica, not far from the Transantarctic Mountains. The top image is from 2002, and the middle image is from 2005. The bottom image shows a technique known as “image differencing” developed by Ted Scambos of the National Snow and Ice Data Center and Robert Bindschadler of NASA Goddard Space Flight Center. Using images captured by the Moderate Resolution Imaging Spectroradiometer (MODIS) sensors on NASA’s Terra and Aqua satellites, Scambos and Bindschadler “subtract” images acquired on different dates but under similar lighting conditions. The subtracted images do not provide actual elevation change, but differences in shadows or brightness can verify that an area’s surface slope—and consequently its elevation—has changed.

The image shows that between the fall of 2002 and the fall of 2005, a section of the ice surface dropped along the edge of the Whillans Ice Stream that flows onto Antarctica’s Ross Ice Shelf. Although the ice surface appeared nearly flat in 2002, it was darkened by shadows in 2005, showing where the ice surface had sunk. The lowered ice surface corresponds with a feature tentatively named Subglacial Lake Engelhardt. Working with Helen Amanda Fricker of Scripps Institution of Oceanography, Scambos and Bindschadler concluded that the lake under the ice had drained during this period. In fact, the team found not just one drained lake, but a complex network of lakes in West Antarctica, adding the new discoveries to a list of over 140 subglacial lakes on the frigid continent. While the behavior of these lakes is not fully understood, they appear to play an important role in the relationship between ice streams and sea level.

For more information, see Something under the Ice is Moving on the NASA Earth Observatory.