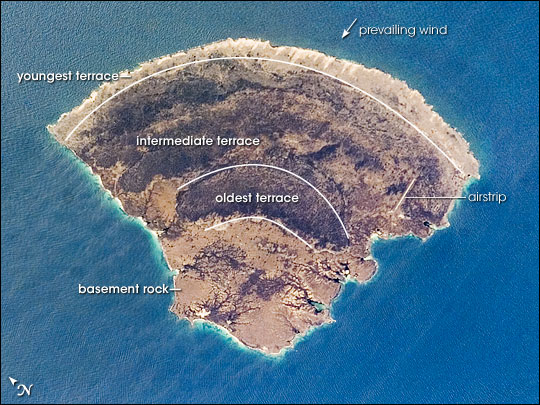 The small island of Blanquilla is named for its white sand beaches, visible in this astronaut photograph as a bright border along the northeastern–eastern shoreline. Located approximately 292 kilometers (182 miles) northeast of Caracas, this Caribbean island is a popular destination for divers and tourists arriving by boat or airplane (the airstrip is visible at image right). Surface currents extending from the western coastline of the island (image left) are caused by easterly trade winds. This dominant wind has also caused movement of beach sand to form white “fingers” extending inland along the east coast (top center).

The plants and animals of Isla Blanquilla are an interesting mixture of arid (cacti, iguanas) and introduced species (wild donkeys and goats), but it is particularly notable for the presence of black coral. Black coral is something of a misnomer, as it refers to the skeleton of the coral rather than the living organism, which is usually brightly colored. Black corals around the world are harvested for use in jewelry and other craftwork, so much so that the species has been listed for protection under the Convention on International Trade in Endangered Species of Wild Fauna and Flora (CITES).

The island is the southernmost above-water exposure of the Aves Ridge, a seafloor topography feature of the southernmost Caribbean Sea. The island’s basement rock (the oldest rocks in an area) is visible in the western (bottom) third of the island. These granite rocks date back to the last part of the Mesozoic Era (the Cretaceous Period, 146-65 million years ago) and the first part of the Cenozoic Era (the Paleocene Epoch, 65-54.8 million years ago). The remainder of the island consists of three limestone terraces deposited on the older basement rock. The terraces get younger from west to east (bottom to top) across the island. The terraces record fluctuating sea levels during the Pleistocene Epoch (the Ice Age, 1.8 to about 10,000 years ago). The changes in sea level on the island may have been due to glacial advances and retreats during the Ice Age, or tectonic uplift of the island, or a combination of both processes.

The featured astronaut photograph ISS015-E-7771 was acquired May 12, 2007, by the Expedition 15 crew with a Kodak 760C digital camera using a 400 mm lens. The image is provided by the ISS Crew Earth Observations experiment and the Image Science & Analysis Laboratory, Johnson Space Center. The image in this article has been cropped and enhanced to improve contrast. The International Space Station Program supports the laboratory to help astronauts take pictures of Earth that will be of the greatest value to scientists and the public, and to make those images freely available on the Internet. Additional images taken by astronauts and cosmonauts can be viewed at the NASA/JSC Gateway to Astronaut Photography of Earth.