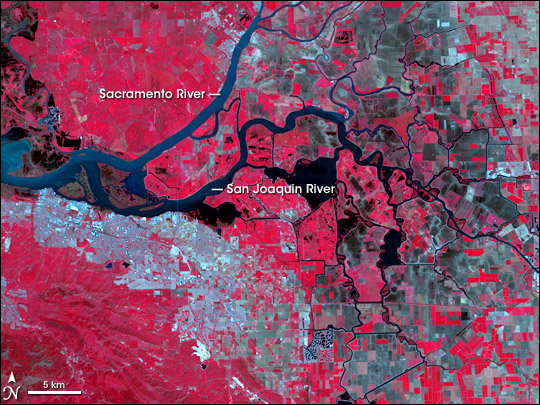 Many parties—endangered fish, thirsty Californians, and consumers who depend on produce from California’s Central Valley—all have a stake in the fate of Sacramento-San Joaquin River Delta. In the past, the delta would flood each spring with the melting snow pack in the Sierra Nevada Mountains, turning the area into a vast marsh of shifting waterways. Soon after the California gold rush in the mid-nineteenth century, however, farmers started to drain the land and build dykes. Newly dried mud flats oxidized and compressed, eventually sinking as much as 8 meters (26 feet) below sea level, and maintaining these depressed islands required an ever-growing network of levees. In the mid-twentieth century, massive pumps began sucking water out of the river system for agriculture and everyday water needs in southern California, pulling weak-swimming fish with the water and endangering their survival. And by 2007, some 200 invasive plant and animal species had made this delta the world’s most invaded estuary.

On April 30, 2006, the Advanced Spaceborne Thermal Emission and Reflection Radiometer (ASTER) flying onboard NASA’s Terra satellite captured this image of the Sacramento-San Joaquin River Delta. In this image, red indicates vegetation—the brighter the red, the more lush the vegetation. Dark blue indicates water, including the Sacramento River in the west, the San Joaquin River in the east, and a network of smaller tributaries and reservoirs in between. Blue-gray areas indicate buildings and paved surfaces, appearing in their customary rectangular shapes. The “islands” between these waterways don’s rise above the water but survive below it, thanks to levees surrounding them.

By the early twenty-first century, sinking land, water demand outpacing supply, and invasive species had all stressed the delta’s natural resources. Added to that problem was the area’s proximity to several seismic faults. A 2007 Science article suggested that if a major earthquake were to strike the area, the resulting levee breaches and flooded farmland could dwarf the effects of Hurricane Katrina’s damage to New Orleans. Beyond flooding farmland, a quake could force salt water from the San Francisco Bay into the freshwater river system, affecting the water supply for irrigation and some 25 million Californians.

You can download a 15-meter-resolution KMZ file of the Sacramento River delta suitable for use with Google Earth.