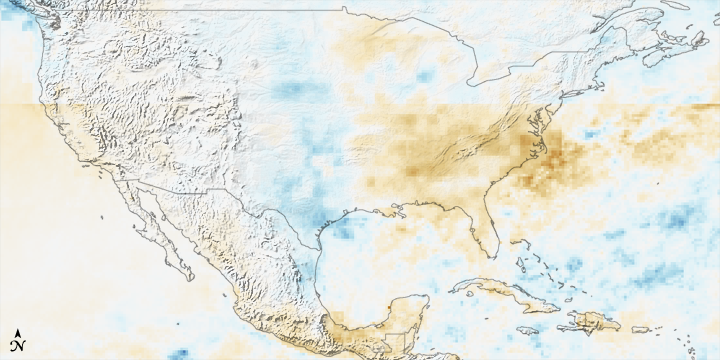 The rainfall pattern across the United States during the first eight months of 2007 is a study in contrasts. Drought dominated both coasts, while the Great Plains states saw far more rain than average. The pattern is illustrated in this rainfall anomaly image, made from data from the near-real-time, Multi-satellite Precipitation Analysis at NASA Goddard Space Flight Center. The Multi-satellite Precipitation Analysis (MPA) is based largely on data collected by the Tropical Rainfall Measuring Mission (TRMM) satellite, which has been in orbit for ten years as of November 2007. This image was made by comparing MPA rainfall data from January through August 2007 to the average rainfall observed during the same period from 1998 through 2006. Areas that received more rain than average are blue, while drier areas are brown.

With our cities and farms, human culture is dependent on consistent rainfall. We plant crops when we expect enough rain to fall to nourish them. We build cities near waterways, where they have a reliable water supply and are easily accessible by boat. When rainfall deviates from normal patterns, disasters often result.

The image illustrates the severe drought conditions that settled over much of the eastern United States, particularly the Southeast, in the spring and summer of 2007. The only significant rain that came to the region during the period was from Tropical Storm Barry in June. Clearly, Barry did not deliver enough rain to break the drought; rainfall is still significantly below average in this image. The resulting dry conditions contributed to large wildfires that burned along the Florida-Georgia border in April and May.

Even while Atlanta, Georgia, recorded one of its driest years, Houston, Texas, set rainfall records. It is as if the United States were folded in half, and all of the rain ran towards the crease in the center, leaving the edges dry. A large area extending from Texas northward through the Dakotas received far more rain than normal as shown by the strip of green and blue up the center of the country. The unusual rainfall caused a series of devastating floods in January, May, June, July, and August. In late August, Tropical Storm Erin dropped very heavy rainfall over Texas and Oklahoma, adding additional water to the flooded area.

Like the East, much of the West received less rain than normal, though the deficit does not appear to be quite as severe as in the East. The drought dried vegetation, priming the landscape for the summer fire season. In 2007, large wildfires burned through many western states, including Idaho and Montana, Oregon, and Utah. By fall, conditions were dry enough that strong winds whipped several fires out of control in Southern California, destroying hundred of homes.