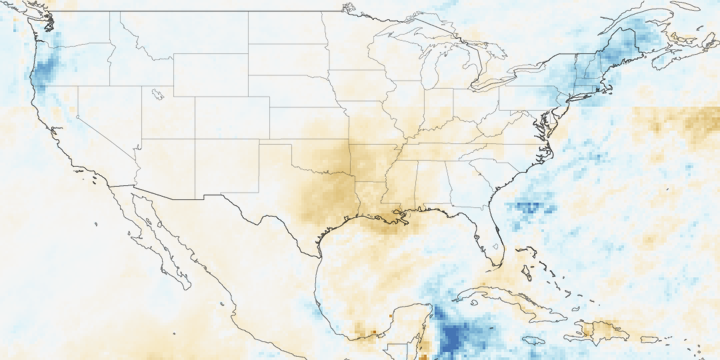 Rainfall across the United States in the winter of 2005–06 has shown the classic pattern of a La Niña event. La Niña is a climate anomaly (departure from average conditions) that consists of cooler-than-average sea surface temperatures (SSTs) across the central and eastern Pacific and warmer-than-average SSTs over the western Pacific. Changes in the atmospheric circulation occur during La Niña events, as well. These combined ocean-atmosphere changes are likely responsible for the drought in the Southwest, the South, the central Plains, and Florida that has led to several devastating wildfires this season.

This image shows where daily rainfall was above and below average in the United States between October 2005 and January 2006 compared to the eight-year average for that time frame. Places where rainfall was above average are in blue and green, while places rainfall was below average are in orange and red. The data are from the Tropical-Rainfall-Measuring-Mission-based, near-real-time, Multi-satellite Precipitation Analysis at the NASA Goddard Space Flight Center.

The Pacific Northwest (green and blue areas), especially along the coast and over the coastal ranges of Northern California, Oregon, and Washington (blue areas) received more precipitation than usual. Almost the entire rest of the country, barring New England, had below-normal rainfall. The most intense rainfall deficits (orange and red areas) include the area stretching from Texas up through the central Plains and Upper Midwest, as well as the Gulf Coast, most of Florida, and along the southern Atlantic coast. In the Southwest, the rainfall deficit added to the stress of several years of below-average rainfall. Most of Arizona, New Mexico, West Texas, and central Oklahoma have received less than 25 percent of their normal rainfall for the period. The current La Niña is expected to persist for the next several months.

The Tropical Rainfall Measuring Mission (TRMM) satellite was launched in November 1997. It measures rainfall over the global tropics using both passive and active sensors, including the first precipitation radar in space. TRMM is a joint mission between NASA and the Japanese space agency, JAXA.