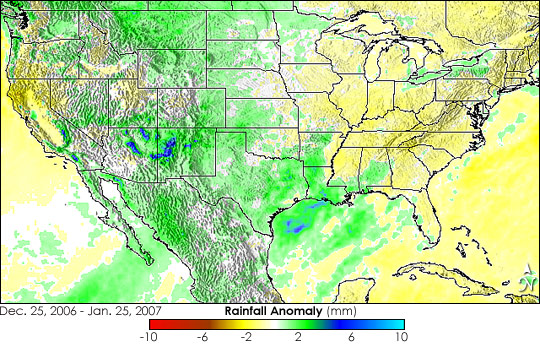 An anomalous warming of the central and eastern Pacific along the equator is part of a well-known climate event called El Niño. An El Niño began in the spring of 2006 and reached its peak in November and December. El Niño has far reaching effects. The anomalous warming of sea surface temperatures in the eastern Pacific affects general atmospheric circulation patterns, which impacts both temperature and precipitation patterns well into middle latitudes.

Deviations in the rainfall patterns across the United States due to El Niño are well-established based on past events. The northern Gulf Coast experiences above-average rainfall, as do California and the Southwest due to a stronger-than-average subtropical jet stream. The Ohio Valley and the Northwest tend to see below-normal rainfall.

These deviations from the normal rainfall pattern are illustrated in this image, made from the near-real-time, Multi-satellite Precipitation Analysis (MPA), which is produced at NASA’s Goddard Space Flight Center, based in part on data from the Tropical Rainfall Measuring Mission (TRMM) satellite. MPA rainfall anomalies across the United States are shown here for December 25, 2006, through January 25, 2007. The anomalies are obtained by subtracting the average rainfall from the recent values. The average rainfall measurements are based on data collected since TRMM’s launch in November 1997.

Several of the notable features associated with El Niño are evident. The northern Gulf Coast west of Florida is wetter than average as is southern California. The Four Corners region in the Southwest is also very moist, which is typical for El Niño. Drier-than-normal conditions are evident over the Ohio Valley. There are some exceptions to the expected El Niño rainfall patterns, however. Montana, for example, is usually drier than average during El Niño but appears relatively moist, and Florida is usually wetter than average but shows below-normal rainfall for the period. Also, the dry anomaly in the Northwest is concentrated over northern California instead of spreading over Washington and Oregon as might be expected.