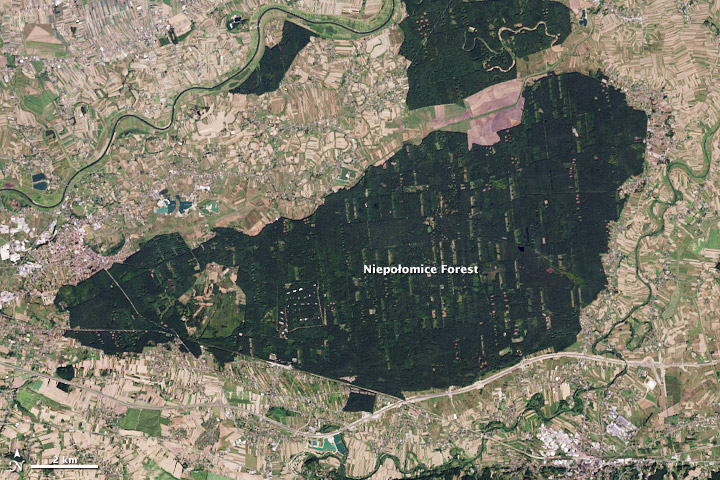 Sometimes the view from space provides more than just an inspiring look at Earth’s landscapes; sometimes it tells you about history or politics or economics, too. The Niepołomice Forest is a prime example.

In this image, acquired on September 8, 2013, by the Operational Land Imager (OLI) on the Landsat 8 satellite, the forest is an island of green surrounded by towns and farms. Poland has protected parts of the forest from encroachment since the thirteenth century.

The name probably comes from an old Polish word for “something that is difficult to destroy.” The forest contains pockets of an old-growth deciduous forest that once covered this region. Sometime around 1242, the Niepołomice Forest became part of the royal estate to serve as a hunting ground for large animals like bison, bears, wolves, and aurochs (a wild cow, now extinct). The state has managed the forest for a variety of purposes since that time.

The forest was a source of wood for fuel and building, particularly in nearby salt mines; by the mid-1700s, much of it was gone. In the 1800s, the rulers of the Austro-Hungarian Empire divided the forest into smaller plots, many of which were cleared and planted with pine forest. The losses continued through World War II, when occupying German forces cut down large areas to obtain wood.

After the war, the Polish government moved to protect the remaining old-growth forest. Today, it is still managed in small chunks with different management strategies. These divisions are visible in the image, with sections of the forest that are a solid, untouched green, while others contain paler green clearings. The preserved area also acts a reserve for bison (żuber).

Having historical information about the forest is one key to interpreting this satellite image. For additional tips, see How to Interpret a Satellite Image: Five Tips and Strategies.