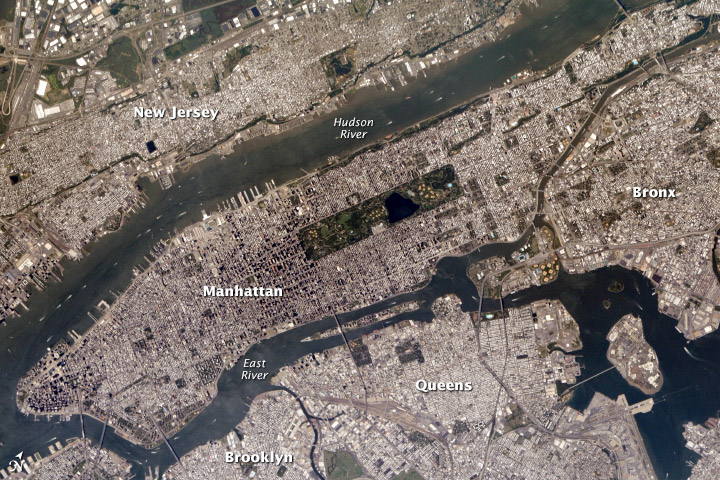 New York is the most populous in the United States. It gets even more crowded on Thanksgiving Day.

“The city that never sleeps” is home to more than 8.3 million people (2012 data) packed into 302 square miles (784 square kilometers)—a population density around 27,000 per square mile. On Thanksgiving Day those citizens have more company, as three to four million people line the streets to see the annual Macy's parade. (Another 50 million watch it on television.) The parade passes down roughly 50 city blocks, about 2.5 miles, from Central Park West and 77th Street to Herald Square.

This image of New York City and northeastern New Jersey was captured early in the afternoon on August 25, 2013, by the ISERV Pathfinder camera on the International Space Station (ISS). The image is actually a mosaic of four digital photographs captured about one second apart. Central Park stands out as the great green space in the middle of Manhattan. Four of the city’s five boroughs—Manhattan, Brooklyn, Queens, and the Bronx—appear in the image; the fifth, Staten Island, is off the screen to the left. (Note that the image is rotated so that north is to the upper right.)

New York City has another historical connection to U.S. holiday of Thanksgiving. On October 3, 1789, President George Washington announced in the then-national capital of New York that November 26 should be offered as “a day of public thanksgiving and prayer to be observed by acknowledging with grateful hearts the many signal favors of Almighty God especially by affording them an opportunity peaceably to establish a form of government for their safety and happiness.” Seventy four years later, President Abraham Lincoln made this holiday permanent, declaring that it should be celebrated on the fourth Thursday in November.

View other images related to holidays and holy sites in our newest image gallery: Holidays from the Heights.

These images capture sites of historic and religious significance around the world.