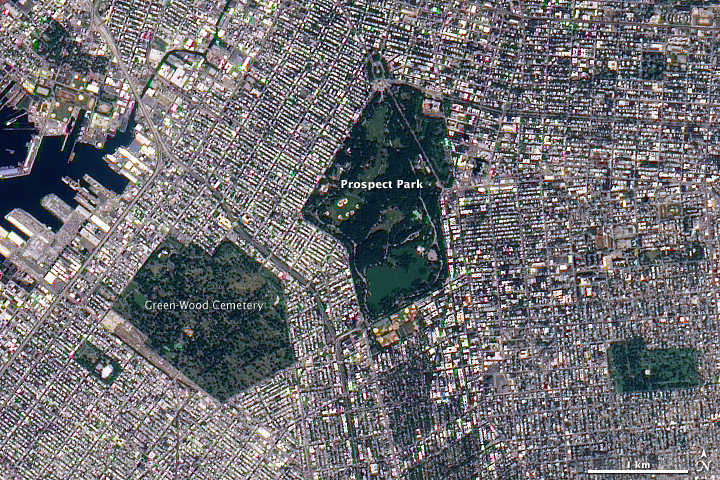 Amid the cityscape of Brooklyn, New York, some green patches remain after years of urbanization. Two of the larger ones are Prospect Park and Green-Wood Cemetery. On September 12, 2001, the Advanced Land Imager (ALI) on NASA’s Earth Observing-1 (EO-1) satellite took this true-color picture of these green oases. Both areas retain the hues characteristic of late summertime, with deep green trees hovering over medium green fields.

Prospect Park was designed and built between 1865 and 1895, the effort overseen by the same men who designed New York City’s Central Park. Covering some 585 acres (2.4 square kilometers), the park holds a combination of recreational facilities, forest, and wetland. Established in 1838, Green-Wood Cemetery was one of the first rural cemeteries in the United States. Its beauty soon drew large crowds of visitors, and helped inspire public parks such as its neighbor, Prospect Park.

Today, Prospect Park holds much of Brooklyn’s remaining indigenous forest and preserves a parcel of wetland. Two centuries ago, New York City contained some 224,000 acres (roughly 900 square kilometers) of freshwater wetland, before urban growth claimed most of the land. Prospect Park’s wetlands are partially human-designed, but also result from much older natural forces.

Approximately 75,000 years ago, the massive Wisconsin Glacier crept over what is today New York City, grinding rock ahead of it. Some 50,000 years later, the ice melted, and the resulting waterways cut through rock on their way to the sea. Occasionally, blocks of ice broke off the receding glaciers and were buried by sediment. As the ice blocks melted, they left depressions, nicknamed kettles, on the land surface. Many of these kettles collected water, and where the water was shallow or sufficiently slow-moving, plants took root. Cycles of plant growth and decomposition built peat bogs. By the time New York City began its long path to urbanization, diverse wetlands covered the region. The watercourse in Prospect Park preserves part of a once-ubiquitous ecosystem.