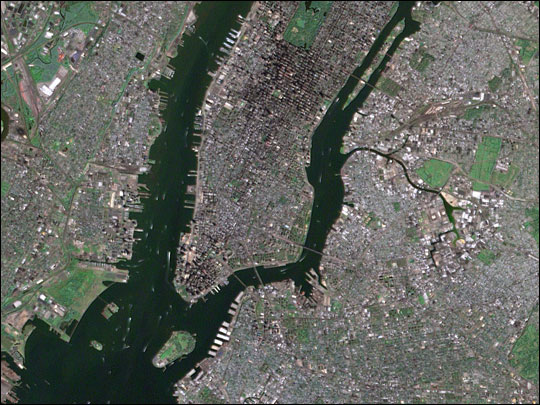 The southern end of Manhattan, as well as Ellis Island, New Jersey, and Queens are visible in this image from a perfectly clear day in September, 2002.

Bright city lights along the coastline and interior delineate the eastern coast of the United States at night. Known as the “city that never sleeps,” New York City with its population of more than 8 million residents (in 2000) is the largest and brightest metropolitan area along the coast. The metropolitan area straddles the Hudson River and spreads eastward over Long Island. Philadelphia is the second largest city in this image, situated south of New York (lower left in this scene). One of the most richly historic of U.S. cities, Philadelphia is where the Declaration of Independence was signed in 1776. The crew of the International Space Station took this image from a vantage point well to the northeast of the cities, with the camera pointed westward back towards New York City and the coast. The result is that the perspective is highly distorted but still recognizable. Low clouds have formed over the waters of the Atlantic and have settled into some of the valleys of the Appalachian Mountains to the northwest.