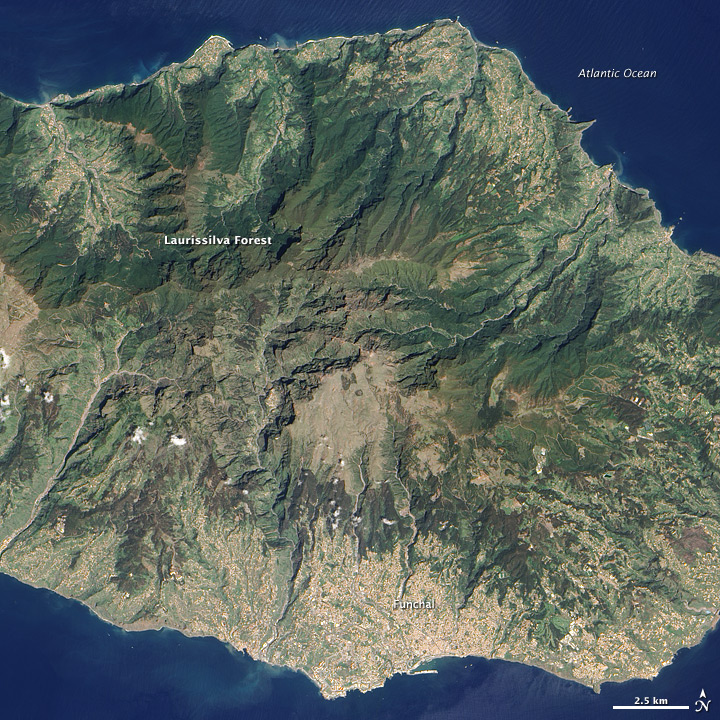 Located in the Atlantic Ocean about 700 kilometers from the coast of North Africa, Madeira Island is the top of a giant shield volcano that rises six kilometers from the ocean floor to reach an altitude of 1,862 meters above sea level. When Portuguese explorers arrived there in the early 1400s, they were so impressed with the thick forest covering the steep, mountainous island that they called it Ilhe de Madeira, Island of Wood.

The Advanced Land Imager (ALI) on NASA’s Earth Observing-1 satellite acquired this detailed, true-color image of Madeira on April 25, 2010. The image shows that deep green forest survives intact on the steep northern slopes of the island, but in the south, where terrain is gentler, the terra-cotta color of towns and the light green color of agriculture are more dominant.

The forest of Madeira is known as Laurissilva, a forest that is similar to high-altitude tropical rain forests (“cloud forests”). Laurissilva is a relic of the forest that once thrived across southern Europe and North Africa, but which disappeared as the last ice age ended and the regional climate became hotter and drier. Madeira’s mild, subtropical climate and isolation preserved the laurel forest as it became extinct elsewhere.

The surviving Laurissilva is both a natural reserve and a World Heritage Site. The remaining forest covers about 15,000 hectares, making it the largest Laurissilva forest in the world. About 90 percent of the forest is believed to be old growth, primary forest, says the United Nations. The Laurissilva includes a wide diversity of plants, including a number of rare ferns and flowering plants.