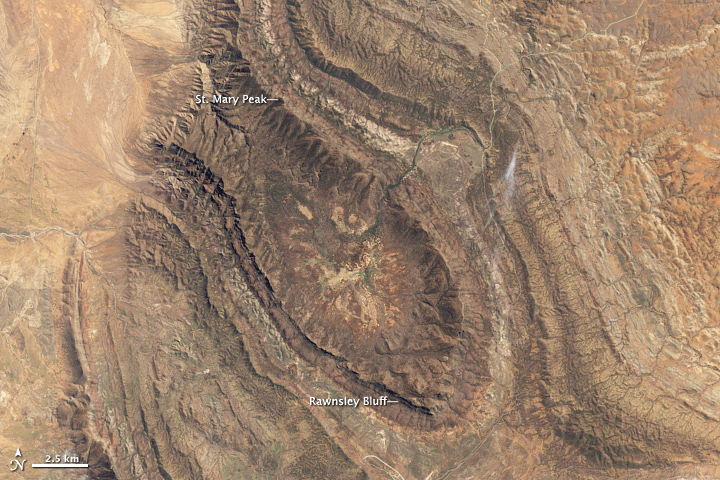 Pound is an old English term for a livestock enclosure usually surrounded by stone walls. Geologists use the term for rock formations that resemble such enclosures on a massive scale, and one of the best examples of a pound is Wilpena Pound in Australia. The feature occurs in the Flinders Ranges of South Australia.

On March 7, 2003, the Enhanced Thematic Mapper Plus on the NASA/USGS Landsat 7 satellite captured this natural-color image of Wilpena Pound and its surroundings. Wilpena Pound and nearby mountains appear in shades of beige, brown, gray, and green. Although the area is semi-arid, pine trees grow naturally throughout much of Wilpena Pound. Areas of bare, pale soil appear as patches of tan in the middle of the pound.

Wilpena Pound is roughly 17 by 8 kilometers (11 by 5 miles), and the floor of the pound is 8 by 4 kilometers (5 by 2 miles). The center of this feature is the valley floor from a mountain range that long ago eroded away. While the relatively soft rocks in the center of the pound succumbed to wind and rain, the surrounding walls are made of erosion-resistant quartzite.

Although the pound may appear to be surrounded by a single mountain range, it is actually enclosed by two ranges—an eastern range and a western range connected to each other by Rawnsley Bluff in the south. On the northern perimeter of the pound is St. Mary Peak. Rising to a height of 3,825 feet (1,166 meters), St. Mary Peak is not only the highest peak at Wilpena Pound, but also highest peak in the Flinders Ranges. 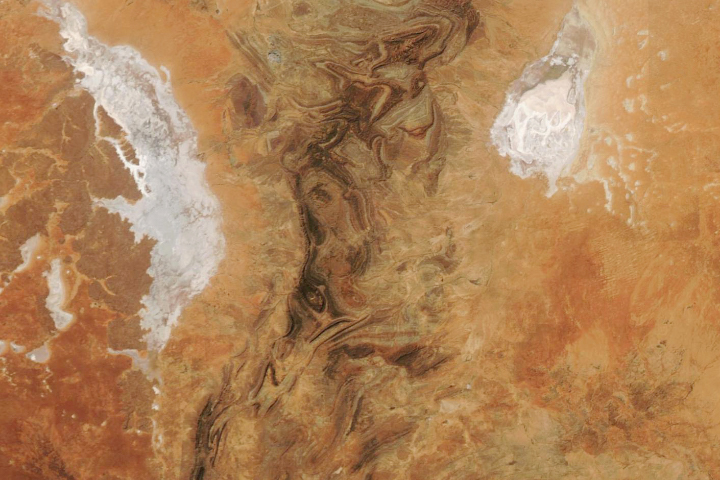