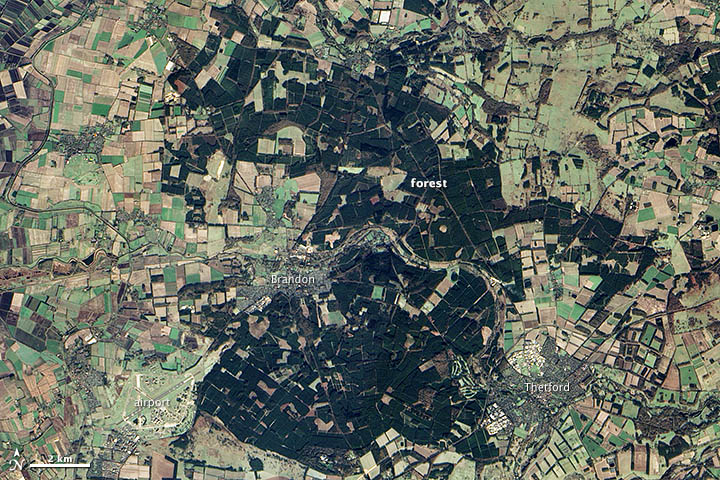 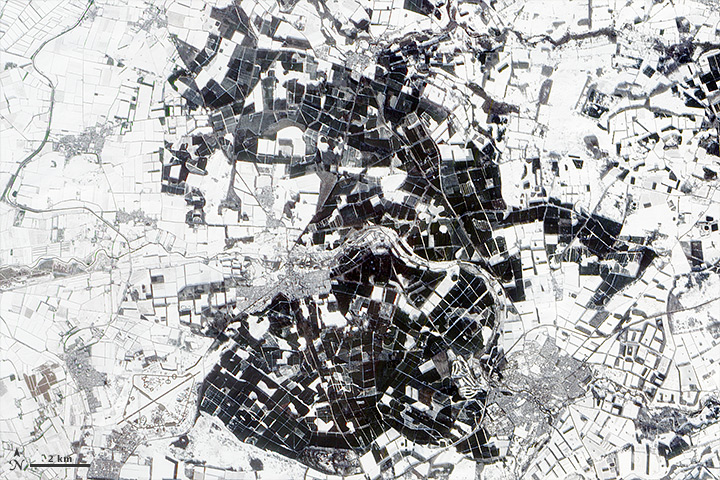 Editor’s Note: Today’s caption is the answer to our Earth Day puzzler challenge.

The human impact on the landscape cuts deep in southeastern Britain. And it’s not just the towns and villages—or farms, roads, and airport—scattered throughout the tract of land shown above. Even the forest in the center of the image is so deeply affected by humans that the term ”natural“ is a misnomer.

Thetford Forest, at least as it appears today, would not exist were it not for human intervention. The forest was created after World War I to prop up sagging timber supplies. Authorities planted stands of lowland pine in uniform rows in place of thorny evergreen shrubs (gorse) that grew naturally amid the sandy, heath-covered landscape. Today the forest is a popular recreational area, and the pine stands are periodically harvested for timber. Meanwhile, the ecosystem that Thetford Forest replaced—lowland heath—is now one of the rarest and most endangered ecosystems in Europe.

The two images above were acquired by the Advanced Land Imager on NASA’ Earth Observing-1 (EO-1) satellite. The top scene shows Thetford Forest on December 27, 2012; the bottom shows the same area on January 27, 2013, after a snowfall.

The other images in this week’s EO Puzzler series showed glimpses of landscapes on four other continents that have been touched far less by human activity. All of the scenes were captured by the Advanced Land Imager.