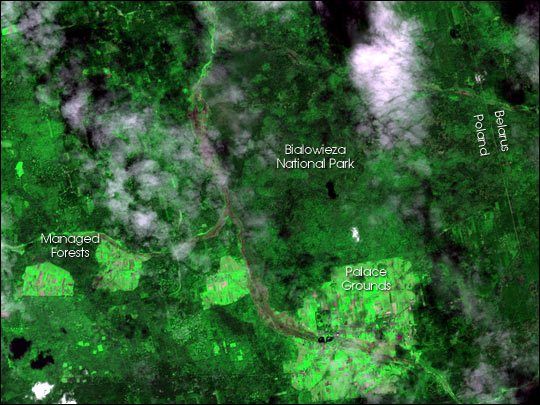 Biolowieza National Park lies on the border between Poland and Belarus. It was first established as a park in 1932, and restored in 1947 in the wake of the Second World War. The park was also declared a biosphere reserve in 1977. It is also a transboundary World Heritage site in conjunction with the Belovezhskaya Pushcha Biosphere Reserve adajacent to it on the Belarus side of the border. It is a section carved out of the much larger Bialowieza Forest: the park is slightly less than one fifth of the forest area. The Biolowieza Forest is a unique ecosystem: not only does it contain a rare European lowland old growth forest, but it also lies in a border zone between the boreal and temperate climate zones. Within its borders are some of the southernmost stands of boreal species such as the norway spruce. It also contains temperate species at their northernmost limits, such as sessile oak. The forest also contains a complex mosaic of plants and animals, including forest ungulates, birds of prey, and a wide assortment of vascular plants, mosses, lichens, and fungi. It is also the site of successful reintroduction of species including the European bison and beaver.

The preservation of this area owes a great deal to its protection over several centuries from leading figures in central Europe, from Polish kings, Lithuanian princes and dukes, and the Russian Tsars. Their interest in maintaining the land focused on its leisure use as hunting grounds, but this also provided protection from most agricultural use and land clearing. Its national park status in the 20th century has further protected it from development, though areas around it have been subjected to conversion to commercial lumber industry. In the summer of 2003, a new management plan for the Bialowieza Forest called for removing trees in an effort to contain infestations of bark beetles. These new policies have been the subject of heated debate in the forestry and ecology communities, with conservationists accusing the government of clearing the most valuable timber under a dubious guise of forest protection, while government officials cite the plan as an example of sustainable forestry practices. Forest clearing and poor land practices in the adjacent land in Belarus, such as felling trees that are hosts for the bark beetle and failing to remove the logs promptly, continue to be a source of growing concern to ecologists as these last stands of primeval European forest are turned to commercial land use and pressures.

In this scene, acquired on April 29, 2002, by the Terra satellite’s ASTER instrument, many of these features can be discerned. The old palace grounds are quite evident, as are the clear cut areas in the Biolowieza Forest outside the park, whose boundaries are partially defined by the Lesna River and the international border with Belarus. The international boundary appears as the linear feature to the top right of this image where forest has been cleared along the border. This image was created by combining red, near-infrared and green wavelengths (ASTER VNIR bands 2, 3, and 1).