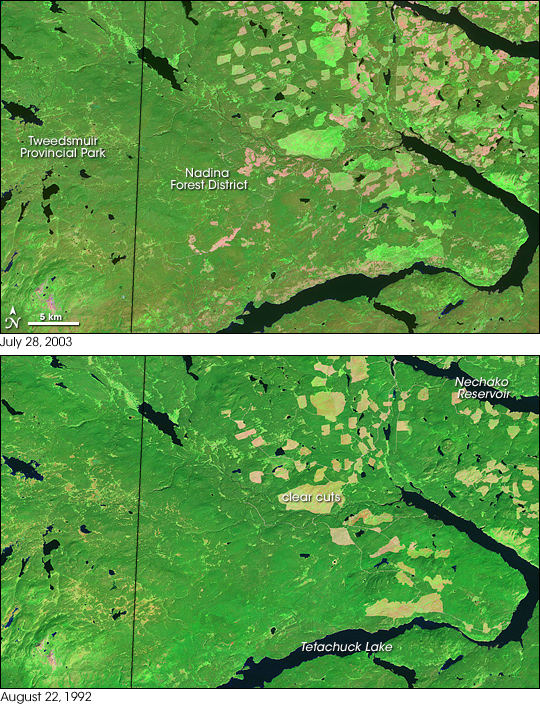 The Advanced Spaceborne Thermal Emission and Reflection Radiometer (ASTER) on NASA’s Terra satellite captured the top image on July 28, 2003. NASA’s Landsat 7 satellite captured the bottom image on August 22, 1992. Both images are made from a combination of visible and infrared light. In these images, deep blue indicates water, and the land surfaces vary in color from deep green (forest) to pink-beige (cleared forest or naturally bare ground).

These images show part of the Nadina Forest District in the east and Tweedsmuir Provincial Park in the west. In the 11-year period separating these images, the Nadina Forest District showed a cycle of forest clearing and new plant growth on managed timber lands. Large areas that had been clear-cut in 1992—especially an area near Tetachuck Lake and a large area near the center of the image—had greened up again by 2003. The new green, however, was lighter than the surrounding forest and likely resulted from a combination of soil and new plants. In addition to new plant growth in previously cleared areas, Nadina Forest District also showed evidence of new forest harvesting.

Besides differing patterns of harvested areas and new growth, these images show a general difference in overall greenness. The more recent image is paler green, with several areas having a pinkish tinge. The paler color could indicate forest thinning or plants and trees under stress; by 2003, this area was suffering a large-scale infestation of mountain pine beetle. The amount of dead and dying timber resulting from the beetle outbreak increased the amount of timber that logging companies were allowed to cut in Nadina Forest District starting in the early 1990s. However, other factors could be responsible for the paler green color including differences in technology between the two sensors, the time of year when the images were captured, or drought.