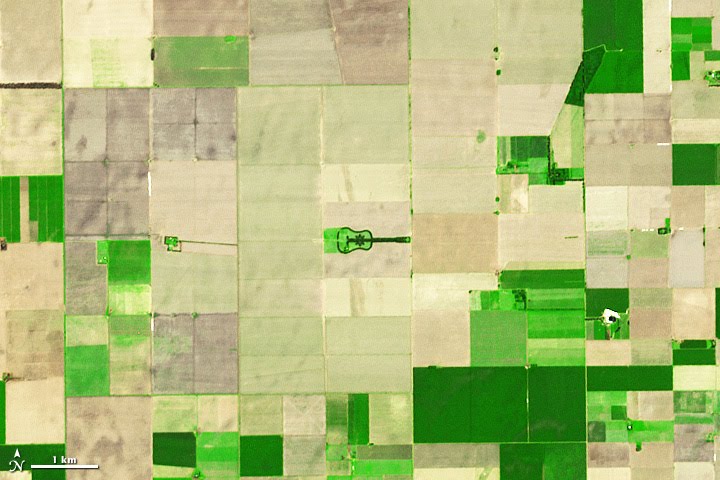 Pedro Martin Ureta created a piece of land art so that it could be viewed from an airplane. It turns out that it is visible from space, too.

In the fertile lowland plains of Argentina (the Pampas), a guitar-shaped forest grows amidst the farmland. The project was started in 1979 by Ureta on his farm near the town of Laboulaye, and it has become a wonder for pilots and passengers flying over the region. Together with his children, Ureta created the forest in a tribute to his wife, Graciela, who died during childbirth in 1977. News reports claim that Ureta has never seen his creation from the air, except for photos from friends.

The image above was acquired on November 2, 2007, by the Advanced Spaceborne Thermal Emission and Reflection Radiometer (ASTER) on the Terra satellite. The false-color image was created with red, green, and near-infrared light.

According to news reports, the forest is composed of more than 7,000 cypress and eucalyptus trees. It stretches nearly a kilometer (two-thirds of a mile) across the landscape.