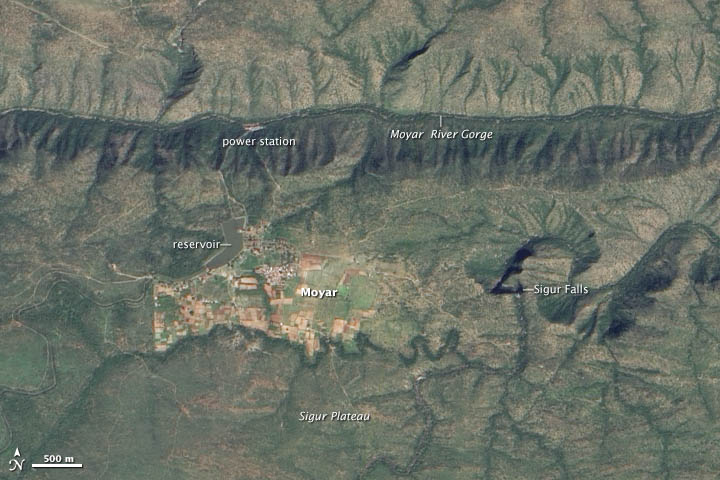 Editor’s Note: Today’s caption is the answer to Earth Observatory’s May Puzzler.

India has two lengthy mountain ranges that stretch along the country’s coasts—the Eastern Ghats and Western Ghats. They intersect in southern India in Tamil Nadu, near the Moyar River Gorge in an area called the Sigur Plateau. As India’s population has grown, the plateau has emerged as a key wildlife corridor that sustains elephants, tigers, leopards, sloth bears, gaurs, and other vulnerable and endangered animals.

The plateau has a growing human presence as well. Indigenous people have lived and farmed in the area for centuries. More recently, large tea and coffee farms have been established. There is also a series of hydropower plants along the Moyar River. And in the early 21st century, resorts have sprung up due to the plateau’s proximity to Mudumalai National Park, the Sathyamangalam Wildlife Sanctuary, and Bandibur National Park.

On November 4, 2012, the Advanced Land Imager (ALI) on NASA’s Earth Observing-1 (EO-1) satellite acquired this image of Moyar, a village on Sigur Plateau that is home to about 1,000 people. The Moyar River lies to the north of the village, at the bottom of a steep gorge. (Note that the gorge looks like a ridge because of an optical effect known as relief inversion.) The smaller Sigur River—visible as a darker line of green—meanders south of the village. The river is an important water source for many types of wildlife. It cascades hundreds of meters at Sigur Falls, forming the dark blue pools on the right side of the image. It then winds east through the steep valley.

About half of Moyar’s residents are government employees who work on the hydroelectric power plant in Moyar Gorge. Water from a tributary of the Moyar River is stored in a reservoir next to the village, then sent tumbling down through a power station in the gorge. Most of the other residents of the village are farmers. About half of the villagers also raise cattle for their dung and milk. The dung is sent to tea farms in nearby Coonoor, where it is used as fertilizer.

While wildlife and humans have long competed for resources on the Sigur Plateau, the situation has grown particularly tense in recent years. The Tamil Nadu state government has sought to establish wildlife preserves that would bar new development and may require some resort owners and other private land owners to vacate the area.

The Sigur Plateau has emerged as a key wildlife corridor that sustains Asian elephants and tigers. Tensions are rising between conservationists, farmers, and resort owners about how the area should be managed.