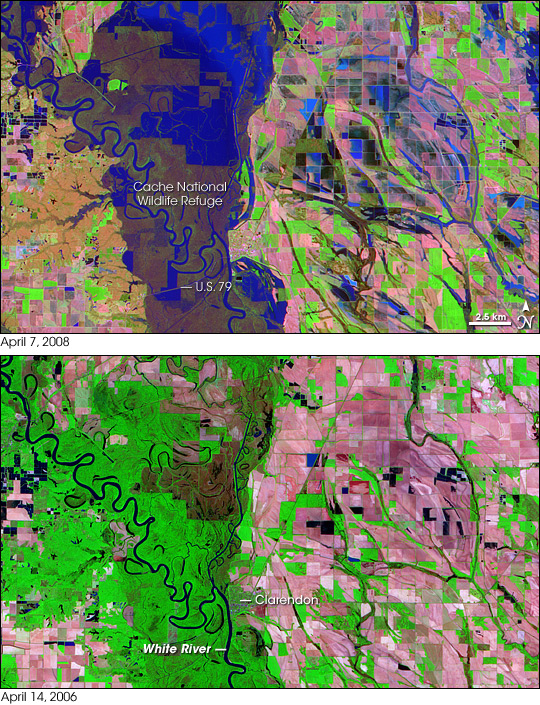 Meandering across a wide, relatively flat plain, the White River of Arkansas is no stranger to flooding. With regularity, spring rains push the river over its banks, inundating the flood-adapted forest that surrounds it. The White River played a role in one of the most destructive floods in the history of the United States. In the spring of 1927, the lower Mississippi River and many of its tributaries, including the White River, burst their banks, covering about 26,000 square miles. The White River reached a record-setting 40.30 feet on April 23, 1927. The river reached its fifth highest crest of 33.78 feet on April 19, 2008, and its sixth highest crest of 33.04 feet on March 29, 2008.

The Advanced Spaceborne Thermal Emission and Reflection Radiometer (ASTER) on NASA’s Terra satellite captured the top image on April 7, 2008, while the river was still rising. The lower image is from April 14, 2006, when water levels were closer to normal. The main channel of the White River twists and turns in a ribbon of dark blue from the upper left corner of each image to the bottom center.

Bright green vegetation flanks the river in the 2006 image. Much of the land is forested and preserved in the Cache River National Wildlife Refuge. Highway 79 forms a thin white line through the forest and across the river into the small city of Clarendon. The area immediately south of the highway is the White River National Wildlife Refuge. The two refuges contain one of the largest remaining bottomland hardwood forests in the Mississippi River Valley. They were established to protect migratory birds and are designated as wetlands of international importance.

In April 2008, the forested land had taken on a dark tone. In all likelihood, the color is from water beneath the forest canopy. When the White River rises above 33 feet, it generally floods all of the land within the levees and a large portion of the refuges, says the National Weather Service. Both refuges reported extensive flooding in April 2008; the White River National Wildlife Refuge was more than 90 percent flooded. The straight-lined boundaries of the well-defined lakes that cut into the Cache River National Wildlife Refuge may well be levees. Around the forest, agricultural fields create a checkerboard of tan and green. Some of the fields are flooded in the 2008 image.