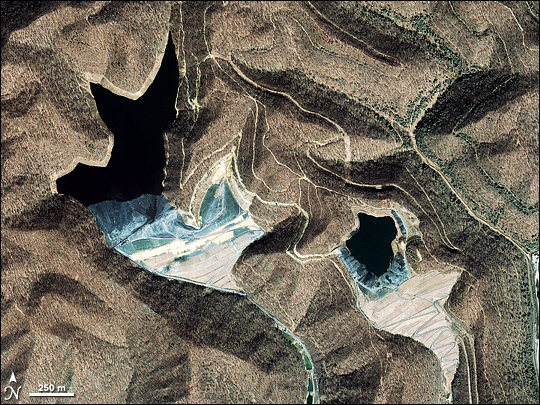 Since the mid- to late 1990s, the number and size of coal mines known as mountaintop removal mines increased dramatically in parts of Virginia, West Virginia, Pennsylvania, and Kentucky. Mountaintop coal mining follows a general process of deforestation, mountaintop removal with explosives and earth-moving machinery, debris sorting to extract the coal, and rinsing the newly mined coal.

This final step creates sludge that contains coal dust and other sediment, and may contain heavy metals or chemicals that would impair water quality in streams and rivers if it were allowed to flow freely off the mine site. To keep any hazardous materials out of local water supplies, mine operators contain the coal sludge in nearby valleys, behind huge earthen dams known as valley fills. On March 18, 2006, GeoEye’s Ikonos satellite acquired this high-resolution satellite image of two sludge impoundments in Boone County, West Virginia. (The mine from which the material was taken does not appear in this image; it lies to the northeast.)

In this late-winter shot, the land surface appears primarily brown, as the deciduous trees in the surrounding forest are dormant. Some evergreen trees line roads and ridgelines. Against the brown backdrop, the rocky debris of the valley fills appears tan and off-white. The breadth and height of these fills can be difficult to appreciate in two-dimensional images, but the zigzag lines on the valley fill are roads that climb from the bottom to the top. The coal sludge fills the valleys behind the valley fills.

Although coal impoundments have a relatively low rate of failure, their extreme size—some hold more than a billion gallons of sludge—makes any breach potentially devastating. In 2000, Congress directed the National Research Council to undertake a review of mining and engineering techniques related to these structures and make recommendations for improvement after a sludge impoundment in Kentucky collapsed into an underground mine and poured 250 million gallons of sludge into rivers and streams. No human lives were lost, but the environmental damage was extreme; some streams were buried to a depth of five feet in sludge.