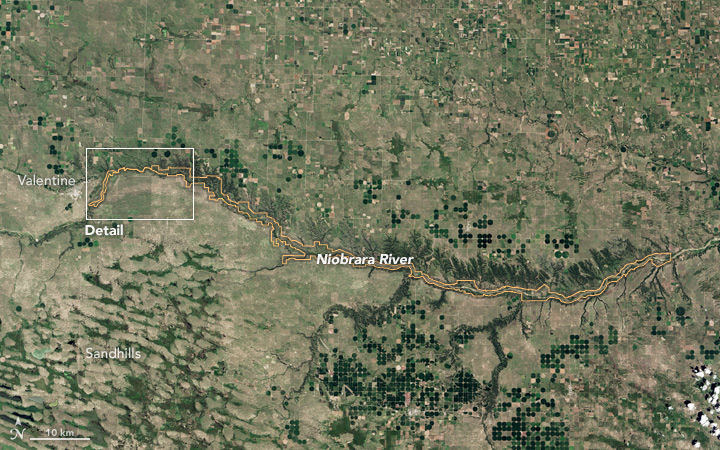 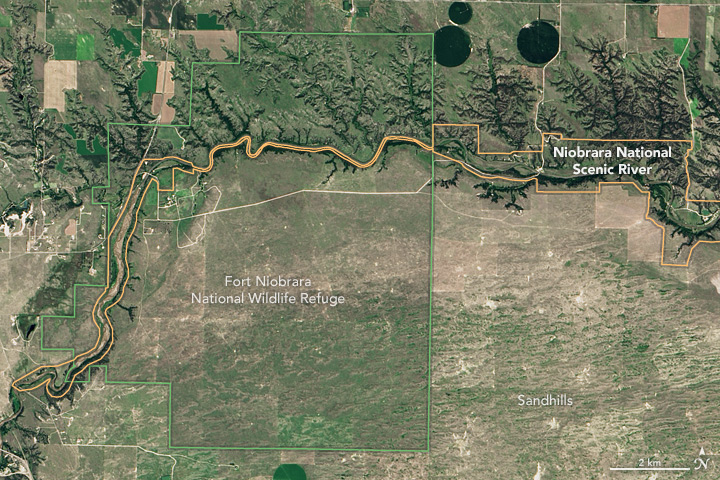 Visit the Niobrara National Scenic River, and you might not recognize that you are in Nebraska. Disparate forest types—some representative of ecosystems hundreds of miles away—converge in the river valley. For example, the nearest stand of ponderosa pines grows a state away in the Black Hills of South Dakota. Tree species associated with eastern deciduous and northern boreal forests also appear in the river valley.

On July 16, 2015, the Operational Land Imager (OLI) on Landsat 8 acquired these natural-color images of the Niobrara. The river, stretching more than 800 kilometers (500 miles), is a tributary of the Missouri River. The 122-kilometer (76-mile) segment pictured here, which begins near the town of Valentine and flows east, was declared a National Scenic River in 1991.

This protected area differs from more traditional National Park sites. For instance, the boundary (shown in the top image) is long and thin, tracing the path of the river. Moreover, much of the land near the river’s banks is privately owned. One exception is the Fort Niobrara National Wildlife Refuge, pictured in the second image. Once a frontier army post, the refuge now provides habitat for bison, elk, prairie dogs, and birds. 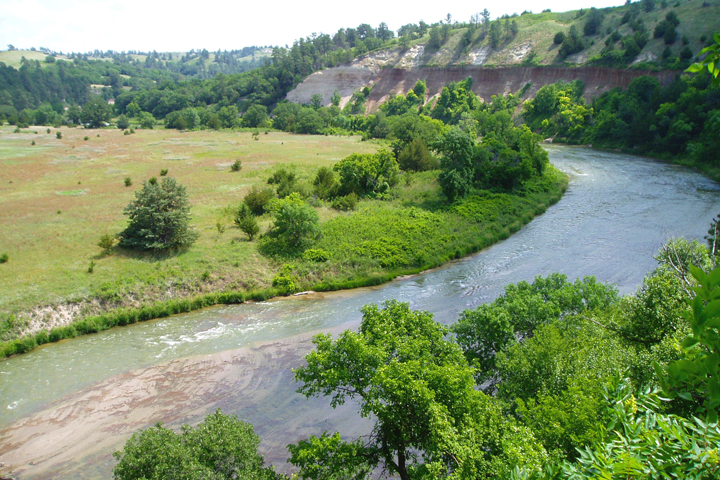 The area around the river is known for more than its unique mix of vegetation. More than 200 waterfalls cascade over erosion-resistant sandstone cliffs along the Niobrara’s banks. At about 50-feet high, Fort Falls is the state’s third-highest waterfall. The photograph above shows the view from the Fort Falls overlook.

You can hike to the top of many of the area’s bluffs for a view of the Sandhill prairie to the south. Nebraska’s Sandhills—old sand dunes now stabilized by grass—cover about a quarter of the state and played an important role in shaping the valley plains around the Niobrara.

Today, the river cuts through the valley and is fed primarily by groundwater from the Ogallala Aquifer. Since so little water comes from rainfall and runoff, river levels don’t fluctuate much. Such predictability is a boon for recreation and the thousands of visitors who flock here each year to paddle, float, and witness the rare scenery. 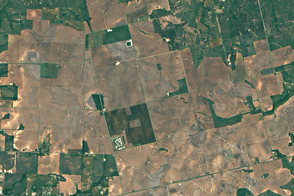