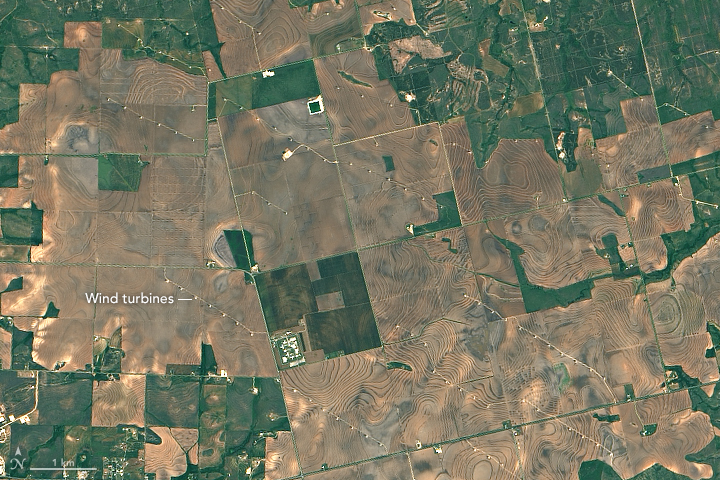 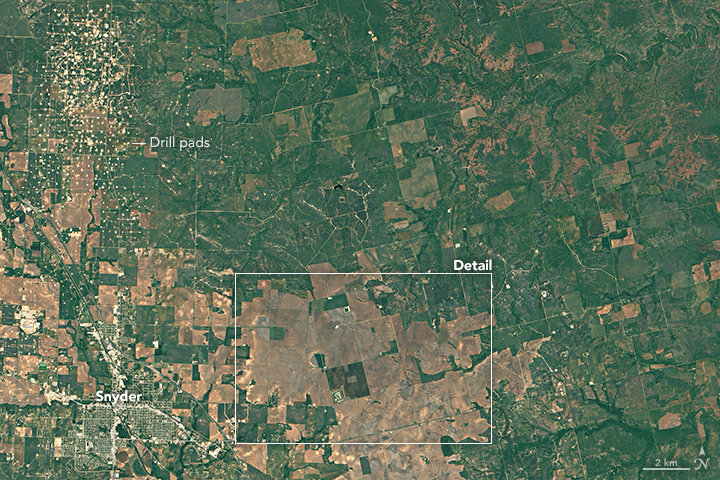 This Image of the Day is the answer to the May puzzler.

When it comes to energy production, other states have a tough time competing with Texas. The Lone Star State leads the United States in oil reserves and oil production. It is the number one producer of natural gas and lignite coal. Texas also produces more wind power than any other state, accounting for one-fifth of total U.S. production.

On April 29, 2015, the Operational Land Imager (OLI) on Landsat 8 acquired an image that shows one sliver of the booming Texas energy economy. The image highlights rows of wind turbines in Scurry County near Snyder, Texas. The wind turbines are oriented in lines that run southeast to northwest so that the blades face into prevailing winds. Most of the turbines in this area—part of the Camp Springs Wind Farm—are 119 meters (390 feet) tall, have blades that are 39 meters long, and have an individual generating capacity of 1.5 MW.

The turbines are located in an area where cotton is a major crop. The banded patterns on the landscape are likely the result of contour farming or skip-row planting. Contour farming is a growing technique in which farmers till around slopes rather than straight over them in order to reduce erosion and increase the moisture retained by the soil. Skip-row planting is a strategy used in dry regions that encourages plants to utilize water more efficiently.

The lower image shows a broader view of the area. Northwest of the wind turbines lies a portion of the Kelly-Snyder oil field. The small white squares are drill pads, many of which have active oil wells. Oil exploration began in the Kelly-Snyder field in the 1920s and intensive oil drilling began in 1948.

The Lone Star State leads the nation in energy production from both wind and oil. 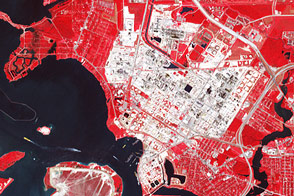 This false-color image shows the largest oil refinery in the United States.