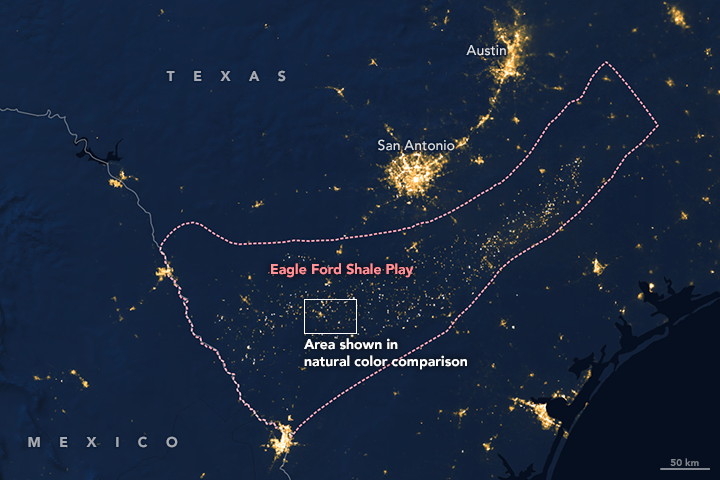 In nighttime satellite imagery, the light from the Eagle Ford shale play competes with the nearby cities of San Antonio and Austin. The electric glow of drilling equipment, worker camps, and other gas and oil infrastructure combine with flickering gas flares to create an unmistakable arc of light across southern Texas. (Play is a term used by petroleum geologists to describe a geological formation that has been targeted for exploration because it likely contains oil or gas.)

On February 15, 2016, the Visible Infrared Imaging Radiometer Suite (VIIRS) on the Suomi NPP satellite captured this nighttime view of Eagle Ford. The image was acquired by the VIIRS day-night band, which detects light in a range of wavelengths from green to near-infrared and uses filtering techniques to observe dim signals such as city lights, auroras, wildfires, and reflected moonlight. The Eagle Ford Shale, which is about 600 kilometers (400 miles) long and 80 kilometers (50 miles) wide, is a source of both oil and gas. Most of the oil-producing wells are located on the northern part of the play; the gas-producing wells are located along its southern edge.

In daylight, the view is also stunning. In the early 2000s, the area east of Cotulla, Texas, was dry, sleepy shrubland. By 2015, a bustling network of roads and rectangular drill pads had completely transformed the landscape. The pair of satellite images below shows how much the landscape has changed. Landsat 5 acquired the upper image on December 17, 2000; Landsat 8 captured the lower image on December 18, 2015. According to a report from the Texas Observer, Cotulla saw its population swell from about 4,000 to 10,000 people in just a few years due to an influx of oil and gas workers. 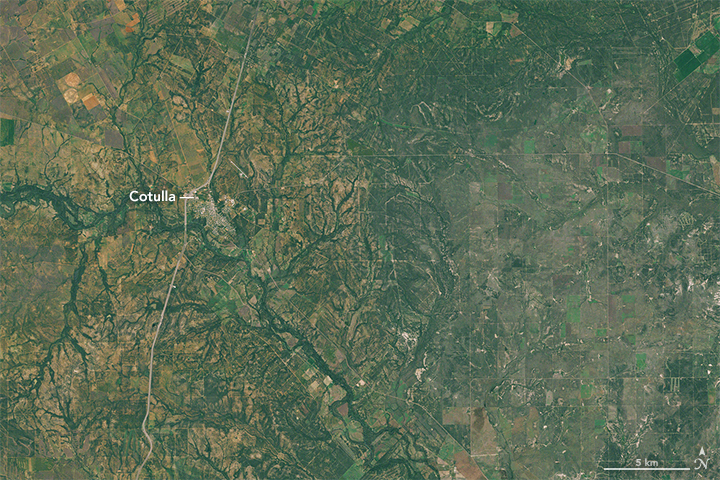 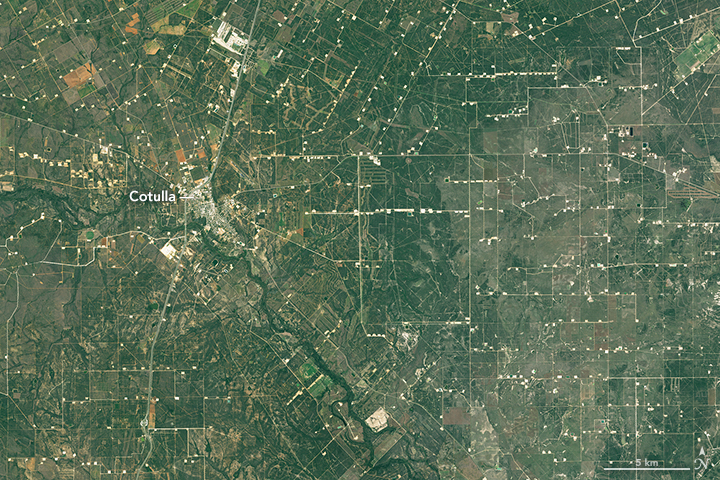 While the oil and gas industry has fractured rock formations with water (“fracked”) to extract oil for decades, better horizontal drilling techniques have led to the rapid development of the Eagle Ford shale. Thanks in part to activity here, Texas is the leading crude oil-producing state in the United States; it is also the leading state for natural gas, accounting for about 29 percent of national production.

While oil and gas drilling remains quite active at Eagle Ford, low global petroleum prices have made oil and gas less profitable than they were just a few years ago. As a result, the number of active rigs at the Eagle Ford play has dropped significantly in the past year. Oil production started to fall rapidly after peaking in March 2015. Gas production has been more resilient, but is also declining, according to data from the U.S. Energy Information Administration. 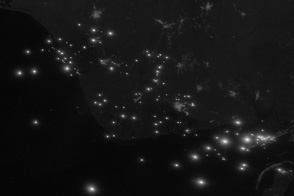